[UPDATE (Oct 14): The Daily Beast is now reporting that Ken Bone has a "disturbing Reddit history," which is apparently connected to porn. The disappointment on Facebook is palpable. I'm not going to read what he wrote, but it's not surprising that a man with a 'stache and a red sweater can go one of two ways. We all assumed he was going to go this way, but it looks like he's going that way. So much for baseball apple pie and Chevrolet (to quote an old ad jingle of my youth). I assume I join many when I say that in this year in particular, we don't need any more exposes on the subject of the human male.]

I'm going to join the bandwagon on this one. Ken Bone, you have ... 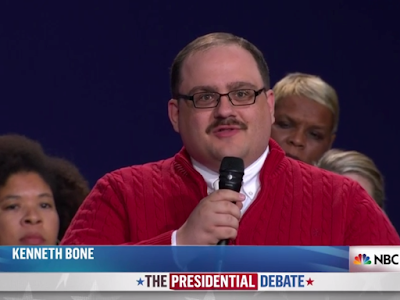 And most importantly, inspired The Ballad of Ken Bone (courtesy of Jonathan Mann).