Two women, both dead, one wearing a beadnet dress.

This is the story of two women.  Both are dead.

One of them wore this dress when she was buried in ancient Egypt.  It is called a beadnet dress. 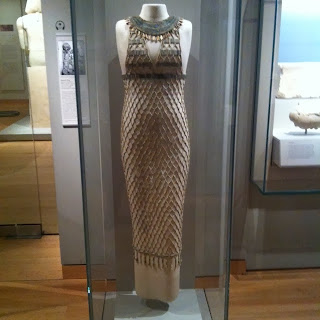 That, her burial that is, happened during the reign of King Khufu, which would mean about 2,550 B.C.

On March 30, 1927 she looked like this, when her tomb was opened by a Harvard-sponsored archeological expedition to Giza. 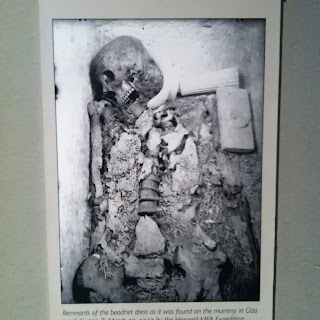 The pattern of the dress was recreated by modern scholars who found places on her mummified body where the beads still lay in their original configuration as when she was placed there 4.5 millenia ago.

The second woman died in Dresden, Germany.  In February, 1945 she looked like this. 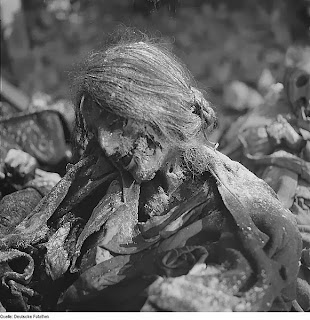 She was killed by the Allied firebombing of that city after British and American planes dropped more than 650,000 incendiary devices such as these over a three-day span from the 13th to the 15th of February, 1945. 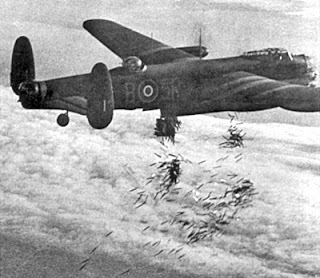 These two women's deaths were separated by 4,500 years of human history, but only by 1,700 miles as the crow flies.  Their lives sat equidistant to the Mediterranean Sea and to the birth of Christ, almost.  About them I know nothing else.

It's hard not to be stunned by the sheer energy that Nicole Fichera brings to her job.  I don't think I've ever met someone so able to pack so many words into a sentence in such a short amount of time.  I've heard her described as the Rachael Ray of innovation and a walking Wikipedia page.  I would say she's the hub around which the wheel of her Boston Innovation District turns, a connector supreme, a Woman for All Seasons.  Her official title is Innovation Director at the Boston Redevelopment Authority, but she is much more than that.  Just meet her.  You'll see.

For starters, she is in charge of the transformation of an area in Boston that is rapidly growing and has some of the most expensive real estate in the city.  She's 30 years old, if that, but probably not even.  She has no staff.  She has no budget.  She has only her energy, her ideas, and her connections.  These seem to be sufficient.

By the time she showed us the sixth floor of the Dry Dock building south of the Seaport District, our tour group from the Brookings Institution Metropolitan Policy Program was tired.  I was exhausted.  A morning in cold Kendall Square in Cambridge followed by time in the Boston Innovation District left us all worn.  Not unnourished, but worn. 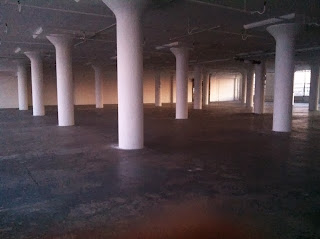 There is a certain type of building that I call a Cathedral of Modernity.  Perhaps it is more properly called a Cathedral to Modernity.  It had an industrial use, usually built about 100 years ago.  Other cities like Lawrence and Lowell are filled with them, old factories and warehouses and the like.  The Dry Dock building in Boston is one such building and its essence is unmistakeable from the moment you drive up to it.  Seven stories high, as long as the Prudential building is tall, it's massive and refined but not delicate.  Its utilitarian design doesn't hide an elegance of simplicity.  With so many large, multi-paned windows, it's an odd mixture of transparency and solid.

Back in the Second World War, tanks rolled off these lines onto waiting ships nearby.  Now this space will hold MassChallenge, the startup accelerator that reeks of the new innovation economy, but also represents the massive economic change underway in Boston, Cambridge, and in cities around the country most perfectly.

The MassChallenge move into the Dry Dock is only one small part in a much larger picture of the Boston Innovation District.  Mayor Tom Menino declared that this area would be an urban laboratory.  Fichera, on her tour, shared some of the fascinating new concepts being working on, like the idea of shared open ground floor space.  Yes, new residential buildings in the District are being asked to design with the idea of communal, open, ground floor work and meeting space.  Anyone can walk in off the street, sit down on a couch, pull out a laptop and work.  Anyone.  This is innovative.   Smart parking is also coming to the neighborhood, with sensors telling drivers where free parking spaces are, to reduce the amount of driving around the block until you find what you're looking for.  It's about increasing the efficiency of the resources we already have, like lobbies and parking spaces.  That's the part of the revolution in our economy that is both not new and entirely new.  It's about sharing more and owning less.  It's Millenial as opposed to Gen X or Gen Y.  It's technological, and it's communitarian.  It's about efficiency and it's about environmentalism.  The amazing faith in innovation to solve problems is awe-inspiring, but also possibly naive. Regardless, the Innovation District is undeniably a radical explosion of energy and creativity by a generation that is convinced it can do.  And seems to be doing.

The District calls itself an urban lab, and by the sounds of it, it is.  Iterating a city as opposed to planning it is one of the radical concepts now being tested out in cities across the country.  In Boston, Tom Menino deserves the credit for this.  He was derided for being an urban mechanic when he was first elected.  No big vision, just a fixit guy.  At the end of his long tenure, he turned that around and said, let me be the new urban mechanic, the guy who rethinks this stuff.  And like most good elected leaders, he had the vision, created the office of New Urban Mechanics, and then has let it run. Thank goodness someone had the good sense to put Nicole Fichera in charge of her part.

Art? Sure. Modern? Not so sure.

A recent trip to the Met in NYC left me wondering: museums still seem to insist that Picasso is the pinnacle of modern, followed closely by his acolytes and other like-minded travelers.  Disclaimer - I know nothing about art.  But I do know this --

This may be an arresting image.  It may still be a revolutionary image in some ways.  But it is no longer new.
Newer Posts Older Posts Home
Subscribe to: Posts (Atom)