... it's in Somerville. Beacon Street from Inman Square to Porter Square is just shockingly bad! When will Somerville do something about it?!

My car obsession has led me to a profound insight of a potentially inconsequential kind: we celebrate car designers as artists, artisans, engineers, and fix-it guys of genius proportions. And in some of the greatest cars, they are all these things and more. The Jaguar XK 120 from the 1950s comes to mind as does today's Porsche 918. There are many more examples.


Still, equally as important to the driving experience as the auto engineer is the road engineer. Driving in its totality is the combination of car and driver and way. There is as much artistry, ingenuity, problem-solving genius in the road you're driving on as there is in the car you're driving in.  Think about that the next time you come upon a covered bridge in Connecticut, or you bank a curve down a stem winder in North Carolina, or crest a mountain in Montana.

The YouTube car magazine EVO is the only place on the web I've found that recognizes the contribution a great road engineer with such unqualified admiration. Italian Antonio Parietti clearly created works of art in his roads on Majorca, Spain and I recommend watching this little bit of car/road/travel porn narrated by the magazine's Henry Catchpole. Don't worry, no naked women (or men) appear, but some truly raw, naked beauty does come through, along with an overly-dramatic, quintessentially British soundtrack to make sure you get the full emotional point of all this scenery. Man and nature do a dance and we get to watch. It's worth the look.

Vincenzo Lancia was born on August 24, 1881. He was one of the early Italian automobile pioneers and founder of a company that bore his name and produced beautiful cars.

I’ve never owned a Lancia, nor have I known anybody who ever has. However, I recently went to the "Tutti Italiani” show at the Larz Anderson Museum in Brookline, a celebration of the genius of the Italians and their automobile heritage. Filled with gems of many shapes and colors — Ferraris, Alfas, Fiats to name a few — it was just another hot summer’s day out on the lawn.

But of all these cars, the car that really caught my eye was a Lancia. It stood out. There was a grand elegance to it, married to a practical simplicity. Lovely curves never hurt either. Here it is: 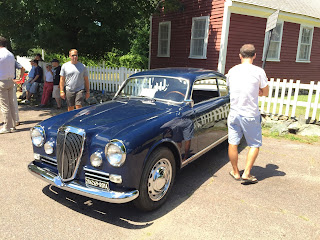 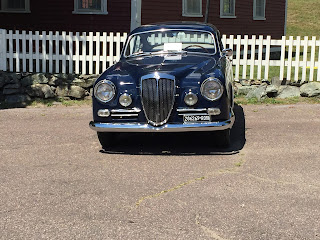 Car enthusiast Jay Leno also likes Lancias and has restored a 1958 Aurelia, which you can see here.

Lancia still exists as a brand, now under the Fiat Chrysler Automobiles group, but things don’t look good for it. Sales now seem restricted to Italy only and there is some speculation that by 2018, FCA will phase out the car altogether.

Post scriptum: When Vincenzo Lancia died in 1937, his son Gianni took over the company. During the Second World War, Gianni joined an Italian resistance group that included political partners across the anti-fascist spectrum. Unfortunately for Lancia, since this group included Communists, the United States didn’t look on it with favor at the end of the war.  While the Americans were doling out cash to help get companies back up on their feet, Fiat received money, Alfa received money, but Lancia received no money.

It's Friday. It's time for the Grab Bag.

Numero Uno
Besides Donald Trump being a proverbial caricature of the idiotic, bloviating megalomaniac who thinks that being president of the United States is just a simplified version of being a real estate tycoon in New York City -- yes, besides all of that, it's worth remembering that Donald Trump made his money ... in the hotel industry ... in the gaming industry ... in the construction industry. Do you think in any of these he ever hired an undocumented worker from Mexico to wash sheets, serve drinks or pour concrete? I'm just curious.


The Cambridge office market remained the most competitive and selective market across Eastern Massachusetts and the Northeast region. The vacancy rate measured 3.4% and has recorded single digits every quarter since early 2010.

East Cambridge solidified itself among the elite real estate markets in the World (emphasis mine). With rents seemingly increasing daily, and few options available, tenants are being forced out of Cambridge into Boston and emerging tech hubs like Somerville and Watertown. Looking forward, with a scarcity of developable land, expect rents to continue surging and demand for alternative locations within Route 128 to persist.

Cadillac ATS, a car with capabilities

According to everyone who tracks this stuff, General Motors is actually making good cars now.

I drove a 2014 Chevrolet Corvette Stingray recently, and I enjoyed that very much. My internet sources (Jeremy Clarkson of British Top Gear primarily) reinforce that notion. Even by European standards, they grudgingly admit, the Corvette is a very good car.

I took the opportunity yesterday to drive another GM product, the Cadillac ATS, a car that’s also receiving praise. Cadillac is the platform GM is going to use to challenge the BMW M series cars. 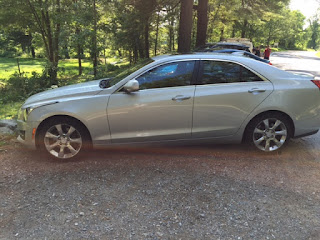 For me, American cars are mostly about overcoming my prejudices. I am still scarred by the terrible products coming out of Detroit in the 1970s. There was a disconnect: terrible quality control, abysmal labor-management relations, and huge, inefficient automobiles couldn’t convince American carmakers there was anything wrong. (This has all be very well reported by This American Life in their 2010 story on the Fremont, California GM plant and their struggles to implement Toyota management techniques.) Eventually, Japanese manufacturers, aided by the Arab Oil Embargo of 1973, started the inexorable process of sweeping the Americans from centerstage. A friend of mine captured the whole saga very well: "My father was a U.S. combat engineer in World War II. He fought against the Germans and bought only American cars on principle. That is until he tried his first Toyota in 1982. Then he never bought another American car again after that.”

Cadillac’s problem for a while now has been that their average customer is old. It’s hard to make a brand sexy for the future when your quintessential user is a retired executive driving to the golf course. How to create a new image that appeals to the next generation? Therein lies the question.

As it turns out, the Cadillac ATS is a better looking car than I was expecting. In pictures, it appears unappealing and boxy, but in person, it’s sleeker and more stylish. 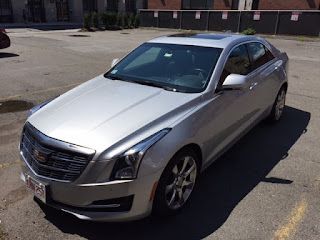 It’s a car with a sufficient amount of power, easily managing the speed limit and then some. It accomplishes something else that impresses me, comfortably traveling at a highway clip but revving at only slightly over 1,500 rpm. Perhaps I shouldn’t be surprised by this feat, but I am.

Its handling in the corners is really very good. Holding very tight to the road in the curves, it nevertheless balloons when it hits rough patches in the tarmac. Balloon means it has that boat-like bounce that so many American cars have, or at least used to have, when they sway disturbingly at speed. How does a car handle the corners well, but seem a little untied on rough surfaces at speed? I don’t really know.

The cabin is spacious and the visibility is acceptable.

Those are the good points. The bad points are these — I found the seat uncomfortably hard and oddly configured. It sat a little too low, and I found the steering wheel to be too tight to my body. (This is in striking comparison to the Chrysler 200 I drove a few weeks ago which was amazingly comfortable and ergonomic over distance.)

The instrument cluster is very poorly designed and hard to use. Touch screen is everywhere, but almost impossible to navigate, though I believe in the newer models, the designers have gone back to knobs and dials, which would be a great improvement. The steering wheel buttons are badly configured. 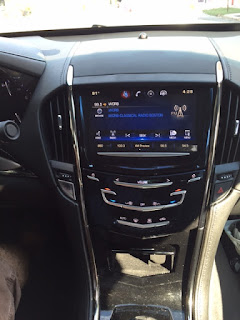 There is a definite blind spot over the driver’s right shoulder and the front pillars are thick and block sightlines when looking forward. The side view mirrors were hard to configure to get just right.  Overall, fit and finish was good, though the door handles seemed a little cheap.

For such a big car, the ATS has a relatively small engine, coming in at either 2L or 2.5L or a larger V6. The brakes stop the car well.

Priced starting in the mid-30s, the car gets Cadillac in the game and does it well. Would I recommend taking it on the windy roads in Lincoln, Concord and Sudbury? Sure, it’s a fun drive and a quality car. 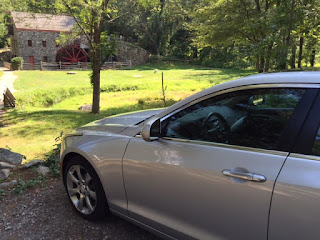 Would I buy it for myself? No, I wouldn’t, but I’m not the measure of that gauge. I’m still driving an old beat up Subaru.

Friday Grab Bag: How we commute, and why smart growth is healthier in so many ways

Did you know that if you walk or ride your bike to work, you will be fitter — and probably weigh less — than your counterpart who drives every day?

Did you know that since 2006, walking, riding a bike or taking public transit are seeing greater percentage increases than driving?

Well, now you do.

A recent Wall Street Journal article looked at the impacts of commute mode on health, and this is the story they told.

Here's the bad news: The top chart shows us just how bad our habits had become. Over 75% of us still drive alone to work.


Here's the good news: But if we look at the bottom chart, we can see how quickly the popularity of walking and biking and taking public transit to work is growing.

As I have said many times in other contexts, these modes of travel to work, walking, biking, public transit, are only possible when you live close enough to work to make it even feasible.  The popularity of these modes is both a reflection of the new-found popularity of urban centers as places to live, work and play, and it is reason to continue to focus our density on walkable, rideable communities near transit nodes.