Beans and Izzy drove across country

My doggy friends Beans and Izzy left Cambridge, Massachusetts earlier this summer and drove to Palo Alto, California with their two owners DiDi and Spencer.


[all photos courtesy of DiDi and Spencer]

Hezekiah Usher on the Common 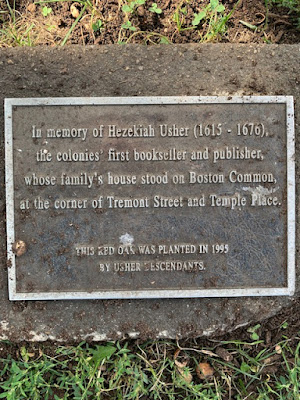 On Monday, I received this email from a woman named Dawn regarding the above photo ...


I am a descendent of Robert Usher, Hezekiah’s brother.  I couldn’t tell why you had posted the image, so I thought I would just ping you and ask if you are a descendent and, if so, did you help with installing the plaque?

I am not related to the Ushers at all. I just thought it was such a Boston thing — among the many historic markers in this town, here was also the first publisher. And he is commemorated by a small plaque on the Boston Common. It was very touching memorial to person most of us have never heard of, who lived hundreds of years ago.Also, the name Hezekiah Usher is pretty wonderful all on its own.In addition, in this time of constant assault on freedom of the press, one of the most fundamental bedrocks of our liberty, it’s nice to remember a man who did so much to make sure that this country had a free press, by first making sure we had a printing press! Who knew that a little old printer could be so important?!!

“I forgive you.” An antidote for our times.

When Brandt Jean forgave ex-Dallas cop Amber Guyger for murdering his brother, he provided the world with an extreme example of human grace, a true antidote for our times. While our politicians always succeed in bringing us to the underbelly of our souls these days, Brandt Jean’s three simple words and his accompanying thoughts caught on video from a Texas courtroom and shared around the world will always be a high point in this otherwise very low year — a exceptional counterexample to the pettiness and mendacity of our utterly broken public morality. It is a shame that such a good person had to suffer so much to offer us all such a profound lesson in humanity.

Donald Trump has always needed someone to do extra curricular work for him.

That's why he kept Michael Cohen around for so long. Cohen wasn't a lawyer. He was a Fix-It Man, always trying to clean up the nasty, dirty places Trump found himself in.

When Trump became president, the Cohen relationship soured ... too much dirty work. Too many people watching. Too many consequences.

Many people assume that Rudy Giuliani stepped into that role for the commander in chief, but they are wrong.

None other than our attorney general William Barr has become Donald Trump's dirty lawyer, his ultimate Fix-It Man.

In America, they say you get what you pay for. We all will be paying for this for a very long time.