A city. A shutdown. A suspect. And us.

It beggars the mind to jot down last week's events in Boston and Cambridge and Watertown - Monday's two bombs near the finish line at the Boston Marathon that killed three and wounded many more; the release of the video footage identifying the suspects and possibly precipitating Thursday's very violent night -- the robbing of a 7-11, the killing of MIT police officer Sean Collier, the car chase from Cambridge into Watertown and the shootout in Watertown that killed one of the suspects and sent the other one into hiding; finally, Friday's day-long manhunt for suspect number 2 culminating in his capture while he bled under a tarp in a boat parked in a backyard.  The first of funerals have taken place, and if injury weren't enough, Westboro Baptist Church showed up to add insult.  Teamsters Local 25 set up a human chain to protect the mourners. This week, Cambridge City Hall held a minute of silence and Officer Sean Collier was remembered by the MIT community with Vice President Joe Biden in attendance.

I still cannot grasp the meaning of last week's events though many good efforts have been made to parse them.  As an urbanist, I am interested in what this says about cities, though I must concede that Shakespeare probably got it best when he asked "What is the city but the people?"

Many smaller stories tile the larger people mosaic -- the police officer able to weep only in the solitude following Officer Collier's funeral; the acquaintance's girlfriend who got shrapnel in the chest from the exploding backpack; the friend woken on Thursday night to the sound of a war on the street outside her house in suburban Watertown; these cannot be minimized.

What transpired on Friday, however, is equally baffling. What can it mean when a whole urban area of over 1 million people comes to a self-imposed halt so that law enforcement can pursue one man?  Where have we come to, and should we be happy that we are there?

The day certainly showed not only the determination but the capabilities that America and an American city can bring.  Within four days after the bombing, one of the suspects was dead and the other was in custody, wounded.

This incredible law enforcement capacity exists for a host of reasons - training, cooperation, technology.  But there are other reasons too. The streets on Friday offered not a soul nor a sound other than the wail of sirens of motorcycle police joined from time to time by the rumble of heavy trucks rolling down the center of the street, canvass-topped and painted in the light tan color appropriate for desert warfare.

The streets were empty because the people stayed inside, in response to a "shelter in place" statement by the governor, a statement that was not an order, but a request.

How does such a request produce such a result?  Social media must be a crucial element.  Only by our interconnectedness - the fact that we are wired to each other and to the web - could Friday's complete shutdown occur.

It brought results.  Still, it produced worries too.  Ought we have been more circumspect? Do we risk group-think building a momentum of its own with unsettling and potentially dangerous outcomes?  Simply believing that we act for the right reasons does not protect us from being wrong, which is only a rephrasing of the aphorism that "the road to hell is paved with good intentions".

The confirmation on Thursday that the body found floating off India Point Park in Providence, Rhode Island this week belonged to 22-year-old Brown University student Sunil Trepathi points out the danger.  Wrongly identified by online sleuths as one of the bombing suspects, Trepathi's name was blasted around the Twitterverse as if he should be sought by the FBI.  The viral nature of the accusation got so bad - while so completely unfounded and incorrect - that the editors of Reddit later apologized to family for what they described as a "witch hunt". The family no doubt appreciated the contrition, but the Genie had left the bottle.  The family issued this statement:

"As we carry indescribable grief, we also feel incredible gratitude.  To each of one  you -- from our hometown and to many distant lands -- we extend our thanks of the words of encouragement, for your thoughts, for your hands, for your prayers, and for the love you have so generously shared.

"Your compassionate spirits is felt by Sunil and by all of us.  This last month has changed our lives forever, and we hope it will change yours too."

They concluded: "Take care of one another.  Be gentle, be compassionate.  Be open to letting someone in when it is you who is faltering. Lend your hand. We need it.  The world needs it."


In the odd paradox of the human spirit, those who have the most legitimate reason for hardness often evince the opposite and ask others to do the same.

It is always tempting to assume we have entered some new era, that technology has fundamentally changed us, that "history has ended" -- to quote one of the great whoppers promulgated after the fall of the Soviet Union.  History hasn't ended. Technology has changed many things, but it hasn't fundamentally changed us, and as Americans, we have an obligation to maintain  the most important aspect of our freedom -- the weary, wary sideways glance by which the governed and the governing view each other.

Surely some revelation is at hand.

For some reason, two lines from William Butler Yeats' poem "The Second Coming" have been rattling around in my head over these past few days:


The best lack all conviction, while the worst

Are full of passionate intensity.

To whom these lines apply, I know not, but Yeats said many things well. This is no exception.

You can read the whole poem here.

Are innovation districts a passing fad, or are here to stay?  This was the motivating question behind a panel discussion I moderated at Harvard's Graduate School of Design on April 3.


The event was organized by an ambitious group of planning students at the school, and in the course of preparing it, we covered many aspects of innovation districts and developed a series of important, interrelated questions about what they mean.  Here's how we phrased it:

Innovation Districts are all the rage, with cities around the world attempting to create them. What makes them work?  What are their local and regional implications?  Can they be planned, or must they occur organically?  Can they be replicated? These are just some of the questions to be discussed by a panel of experts on April 3 at Harvard's Graduate School of Design. 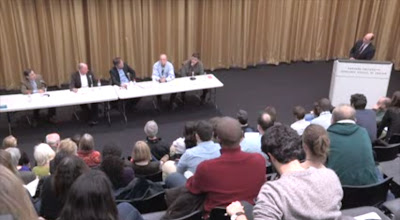 The distinguished panel consisted of:
Click on the link above to watch the discussion.