The Alfa Romeo 4C is a car of great beauty. But given that it only has two seats, doesn’t even have a glove box, and trunk storage space is barely enough to carry one case of wine, the car doesn’t even pretend to be practical in any way, except for the joy driving it on empty, twisty country weekend roads undoubtedly gives. 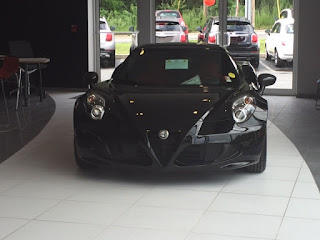 Yesterday, I went out to Herb Chambers Fiat in Worcester to see the only Alfa 4C for sale in the whole Boston metro region. This newly arrived model is a sleek black number, a fit girl in a black party dress, with carbon fiber tub, 4-cylinder 1.7L turbocharged engine that produces 237hp, and a lovely exhaust note complete with crackle overrun. Its dimensions are low and short and wide, and like some other cars that sit down like that (the Lotus Exige comes to mind), it has a side-beam construction that requires some dexterity to get in (and out of) the seats. 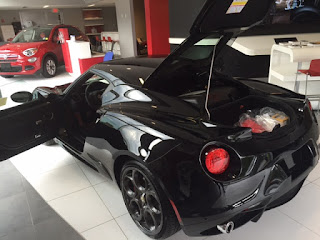 Shifting is done either by the car’s computers in fully automatic mode, or by paddle-shifters on the steering column in manual mode. Drive options are Normal, Dynamic and Race. In this model, black leather covered interior surfaces including door panels, with a  bold red stitching to offset. Car and Driver’s website lists the car at $55K, but in the Herb Chambers showroom, they are asking $78K. Apparently, local demand is high for this gem, a car that reintroduces the Alfa brand to the American market after a long hiatus. 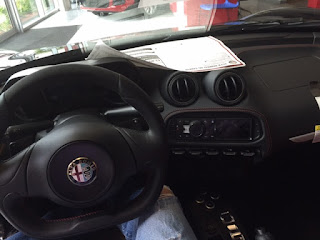 In one of the Top Gear specials, Jeremy Clarkson races Richard Hammond around a track outside Rome, Clarkson in the 4C, Hammond in a Corvette Stingray.  Clarkson makes the slightly bombastic but amusing claim that in the future, all sports cars will have to be like the Alfa, lightweight, small displacement, turbocharged. Perhaps, but it’s fair to say that in the Corvette, General Motors has built a car you could actually use for a multi-day road trip. In the Alfa, you’re simply beyond the car's limits by hopping in, picking up a friend and their luggage, doing a quick food shop before heading out of town on a weekend jaunt.  There just isn’t space in the vehicle, which may only make the point that this is not what the Alfa 4C is all about. Still, being a slave to your passions is nice in concept but the demands of daily life eventually always seem to exact their own concessions. When I rather sheepishly asked if there was a spare wheel in the car, the answer I got was “Not unless you want to drive around with it in the passenger seat.”

Make no mistake, the Alfa is a thing of beauty in the way only the Italians seem to be able to accomplish — simple yet subtle, musical yet muscular, with lines that sweep elegantly from the front grill up over a low-slung powerful body, air-cooling an engine mounted right behind the driver’s head. It is a joy to behold, but unless you already have a large garage for this work of art — in Massachusetts at least, the Alfa would be unusable from December to April because of its minuscule ground clearance — and have another car for everyday chores like food shopping, and lots of money to insure it and fix it, this 4C makes no sense at all. Which is probably why you should try to get it. I say try, because as far as I can tell, there’s only one, and bets are it will get snatched up fast. 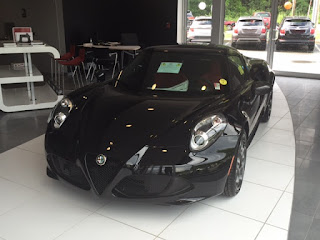