Another version of the American Dream

I'm not a car guy. I'm really just a middle-aged man who has developed a car obsession.

The implications of this are that I don't really know what I'm talking about when I talk about cars. True, they are more than just baubles to me. I have been driving my whole adult life, so the experience of being on four wheels is not new. I have used them for transportation and for recreation. I've gone fast in them, and I've gone slow in them. I've seen the open road, and idled in traffic for hours.

But ask me what a dry sump is, you won't get an answer of any worth.  Push rod suspension. Same. Flat plane crank. No different.

But that doesn't mean I can't put a car in gear and push my right foot down.  That's easy, and depending on the engine, noisy.

Which brings us to the 2014 Corvette C7 with the Z51 package that I drove on Sunday. Big and brawny but nimble and comfortable, each of its 460 horsepower gave it a good push down the roads around Groton, Pepperell and Townsend, Massachusetts and into southern New Hampshire. 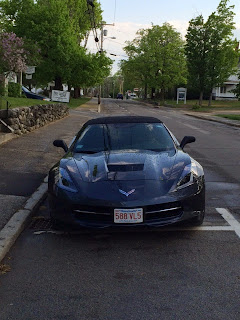 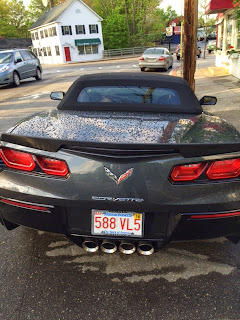 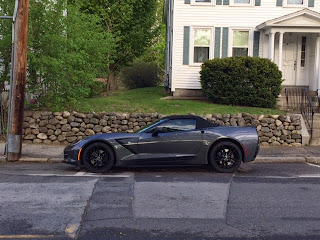 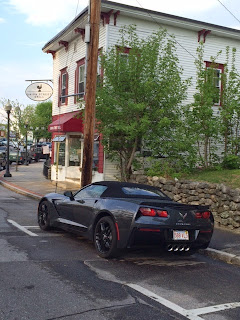 I got the car through Mike O'Leary at New England Corvette, based out of Billerica. Mike runs a great operation, loves his job and his cars, and makes it very easy to sit in something with a heck of a lot of more umph than any average driver sensibly needs. Which is exactly the point.

Which brings me back to the Corvette. What a great car! It's nice to have lived in a time when I can say with pride that an American manufacturer isn't just known for producing garbage. The humorous stories about the Ford Motor Company in the late 1970s are cringe-worthy but I remember them well from my childhood. No one who could buy otherwise bought American. It just wasn't worth it. Mike Spinelli and Leo Parente go through some of the funnier ones in their show After/Drive:

But General Motors is doing its part to change that reputation. After their financial collapse and government bailout in 2009, they are starting to be known for innovation and quality up and down their product line, starting on the eco end with their Chevy Volt.

In the sports car division, they have entered a new era. This C7 Corvette can really get the power down. On a twisty country road in third gear, the engine revs with purpose, there's plenty of acceleration out of the corners, the wheels hold tight to the road, and you're away into the next corner with a smile. The car is not just comfortable, it's comfortably buttoned down. There was no time when anything felt out of control and there was no time when you didn't know there was so much more this car could do. The grip was epic, the engine easily gave it all the pop it needed. It really is a beautiful mix of relaxed grand tourer and eager, angry sports car. A real driving pleasure. But that's only part of how you experience a car. The interior worked well. The craftsmanship was all there, and the instrument panels were easy to use. The seats, very comfortable, and the convertible top, easy to operate. I loved my little car reviewer's moment ... almost as much as I enjoyed driving the C7 through the early spring countryside of the small towns on the Massachusetts-New Hampshire border. It would have been hard to come up with a nicer driving day.
Newer Post Older Post Home