A version of the American Dream 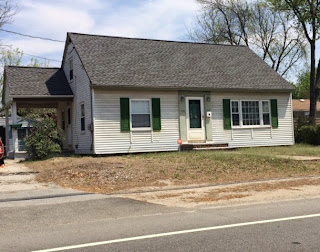 This Billerica house was once the quintessence of the American Dream. It is found in neighborhoods across America. It's where a World War II veteran moved in 1949 with his pregnant wife and waited their first child. He might have just gotten a job at a factory in Lawrence or become an accountant, or perhaps was even had just finished law school.  He was just 29 years old, but wise beyond his years. He'd spent most of his early 20s squatting in a foxhole in the jungle, trying to not get killed, or trying to kill, or watching his friends get killed, or just trying to kill time.

He might have PTSD. In fact, he probably did.  But it was called shell shock or battle fatigue and the bizarre behaviors, the drinking, the anger, the forgetfulness, the fights, they were just bizarre, but not unknown.  He always had a VFW post to go to when it got really bad. He had friends there. Well, not really friends but boys like him who'd also lit a canister of jellied gasoline and hurtled it at a pair of eyes hiding in the undergrowth. Or perhaps dropping a cacophony of metal turds on a church, casually lit a cigarette after flipping down the cover on a bombsight, two miles in the air. Or floating around in blood for six hours, had felt a shark's fin scrape his skin on the way to dragging a screaming mate down the briny deep. It wasn't really friendship. It was more just a common silence, because everybody had a story. Everybody had seen something.

My godmother Jill told me once that when she was a young woman, and of the age when courting and courtship began, all the eligible young men had been in the war, and they had that look in their eye. It made me think of George Bush senior. Or Joe Fox. I always imagined a look that was wary, slightly jaundiced, the proverbial distant gaze. They'd seen a lot more than their years deserved. Now they were eager to get on with life. To forget the war, if that was possible. To take up again where they'd abruptly left off, if that was possible. To live the lives that their dead compatriots would never have the chance to lead.

And in community after community across America, these young men moved into houses like these. But the historic imprint of these houses is no longer relevant in today's America. It's a new century, new challenges and a new generation of young men and women starting out their lives. Yet we carry our past like a burlap sack on our backs, like Sisyphus with his rock.  We are never able to find rest for it, nor able to let it alone either.
Newer Post Older Post Home