It's Memorial Day in the People's Republic and the air is heavy with the first hint of summer. On the quiet streets the wide-brimmed hats are making their first appearances, a bellwether of the approaching season.

While today is about remembering our nation's war dead, I nevertheless had my eyes peeled for interesting cars around Cambridge and I took the opportunity to snap a couple of photos on my way over to this morning's parade. 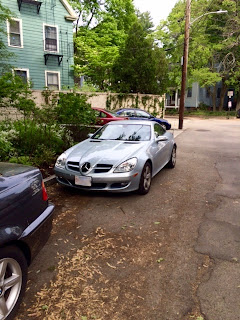 This car belongs to Cambridge Vice Mayor Dennis Benzan and it makes an appearance at the annual Memorial Day parade. The baby blue soft top came off the factory line two years after inaugural run of Mustangs in 1964, and it houses a 3 speed manual gearbox attached to an inline 6-cylinder motor. It's in mint condition but that doesn't stop it from having the evocative engine smells and some of the body squeaks that Fords of that era inevitably had. It's a lovely car both to behold and to drive in. A real pleasure. 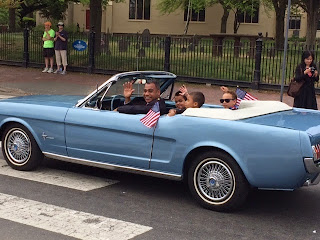