What Central Square are we trying to preserve?

Nevertheless, for whatever reason, this land is considered sacred to some, cannot be touched, should not be changed. In other words, we should saddle another two generations of Cantabrigians, native and immigrant alike, with as equally hostile an urban environment as we were blessed with ... lifeless, aggressive, uninviting, useless.

Um, by the way, it's basically all parking lots for blocks and blocks along Bishop Allen Drive near Prospect Street.


So I ask again, what Central Square are we trying to preserve? Honestly, why are we trying to preserve this? What sensibility says this is what we deserve? What design esthetic says we've arrived at some realization of our goal? What version of creativity says it can never be better? Nevermind that we don't need this much parking, we shouldn't have this much parking. Nevermind that each of these parking lots is less than a tenth of a mile from a T stop and many major bus lines.

Oh yes, and every photo in this post (except for the Whole Foods parking lot, which is just outside this map) was taken in this small area ... 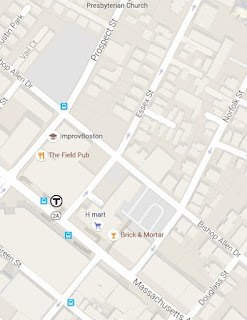