It's a Friday, and that means it's Grab Bag time, but I'm going talk about last night's City Council candidates' forum organized by A Better Cambridge. The focus of the evening was housing, urban issues and density and it was a chance for aspirants to voice their opinions about the ubiquitous affordability question facing this city. WBUR host and Cambridge resident Robin Young mc'ed, and her familiar radio voice filled the auditorium of the Broad Institute on Main Street in a pleasing way. 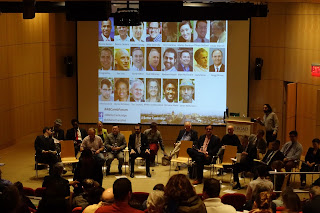 In full disclosure, I am a member of the leadership committee of ABC, and in fuller disclosure, as a former elected official myself, some of last night's participants I hope will get elected (or re-elected as the case may be) and others I am not supporting.  To see more on this, you can read my recent letter to the Cambridge Chronicle about the candidates likely to show up on my ballot.

To cut to the proverbial chase about last night, my takeaways were this --

The incumbents had a much better grasp on this issues, and were much better at presenting their cases than the challengers. That is of course no surprise.

Some of the challengers are intelligent, some are amusing, others are disturbing, others may have a truth-deficit problem, and still others have been recycled through the wash just one too many times for everyday wear.

The questions lingered too long on affordability and housing. As crucial as those issues are, they aren't the only urban questions we need to think about.


Developer money in politics is a titilating topic, but it's a side show to the core issues, as Vice Mayor Dennis Benzan said very well.

It was interesting to see Tim Toomey lay into Nadeem Mazen over Mazen's alleged 50 plus letters of reprimand from the state's Office of Campaign and Political Finance over reporting violations and irregularities [Update: Thanks to an attentive reader, you can see the official records from OCPF for both Mazen and Toomey in the next blog post "Mazen...36 v. Toomey...2"]. Toomey also pointed out that Mazen recently deposited $35,000 of out of state money into his campaign war chest. Not illegal. Just worth noting.

Craig Kelley, who I actively want to see back on the Council, spoke very well.  As one affordable housing developer said to me after the event, "It's been a long journey for Craig", from political outsider to someone in the discussion. I find Craig to be very articulate these days on complex questions about the future of the city, a topic that really needs to be the focus of our attention.

Ilan Levy is someone who used to come and lecture the Council about its shortcomings. I'm sure he still does.  But he's also about to become someone who's received voters' feedback about his own proposals -- the establishment of a strong mayor system in Cambridge. I suspect he's not going to like what he hears.

James Williamson has been to the rodeo too many times. As a perennial 100 vote getter, it's time for him to consider hanging up the spurs.

David Maher was at final interviews for the new Cambridge school superintendent, so couldn't be there. Leland Cheung was not there. Jan Devereux didn't attend.

These events can swing in a heartbeat from farce, to theater, to substance to passion and last night was no exception.  Will the Council have a decidedly different complexion when all is said and done? I doubt it. But that won't be for lack of effort on the candidates' part.  A good event on an important topic. 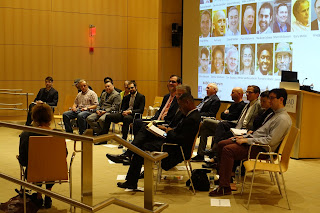