I never thought the J. Geils Band produced amazing music. Their biggest hits defined early '80s pop, sweet (or do I mean saccharine) but not deep. They were noise with very little tune, crafted for radio or the newly-invented MTV.

That criticism feels ungenerous given that John Geils was found dead yesterday in his home in Groton, Mass. Foul play is not suspected.

It turns out, Geils was also a car guy, and that hobby brought him to the auto show on Boston Common, the Boston Cup, in 2015. There I had the chance to meet him briefly and see his car, a very rare one indeed.

Geils owned a 1967 Fiat Dino Spider. That alone might give it street cred, but what made it so special was its badging. Look at the front of the car and note that it has a Fiat badge on the hood and a Ferrari badge on the grille. I believe the story goes that Ferrari actually designed and built the car, but decided they couldn't sell it as a Ferrari so got Fiat to sell it instead. Still, Ferrari didn't want to give up its pride of authorship and insisted that the prancing horse remain on the car, so instead of just one badge, it got two. 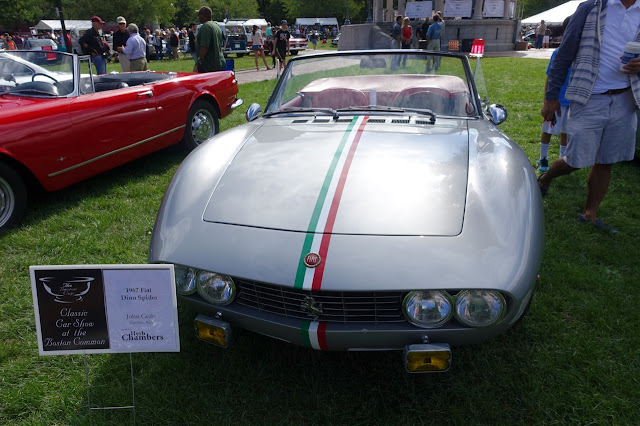 
Bob Marshall, a Man About Harvard Square, died recently. He was ever present in the Square, always perched on the brick tree well in the front of the Harvard Coop. He spoke often of his time on the Cambridge Auxiliary Police, something he obviously cared about deeply. He loved taking photographs too, and indeed took some photos of me when I was a candidate for City Council. Bob Marshall was one of those people who made the Square the Square and his departure makes Cambridge slightly less weird, which makes Cambridge slightly less good. He will be missed.