Friday Grab Bag: Turning blue into green; Economy sours on Trump, but supporters do not

It's Friday, so it's Grab Bag time.

I live in Cambridge, MA, home to some of the bluest voters in the American electorate. We have a Peace Commission, we ride bicycles, we don't like Trump.

Over the past weeks, looking out the window, I've seen all of this blue turn to green. That's green as in environmental, not green as in cash. Here's what I'm talking about.

For starters, I've gotten a 2017 Chevy Volt. That means that I traded my trusted but slightly rusted old Subaru wagon for a 2017 car that drives on electrons. The Volt gets 53 miles on pure electricity and then can go a few hundred more miles on gasoline. 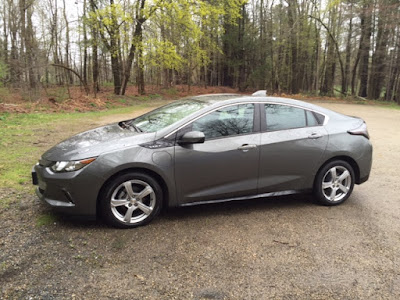 It plugs in to a wall socket and charges overnight. 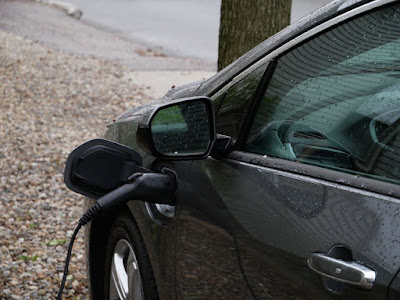 The car handles very well. It's heavy but the weight is down low which gives it stability in the corners. One estimate I heard is that the total carbon cost for an electric vehicle -- factoring in all the carbon it takes to make the car as well as propel the car -- is about half that of a gas-powered car over the lifetime of the vehicle. In addition, because Massachusetts wants to promote a lower carbon future, I also will receive a $2,500 rebate from the state. I'm driving green and loving it.

Then yesterday, when I look across the street, I see that my neighbor has workers crawling all over his roof, installing solar panels. 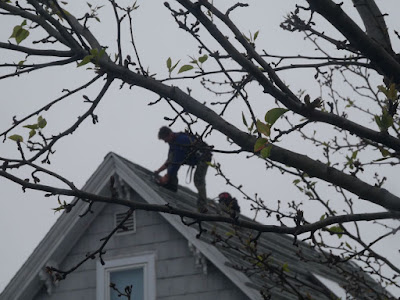 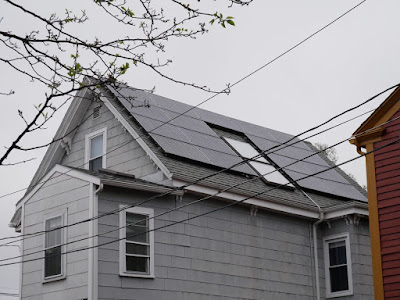 So in the last two weeks I've seen a green car drive up in my driveway and I've watched my neighbor install solar panels to supply green electricity to their home.

This little corner of Cambridge is turning blue into green.
I should note that my other neighbor installed solar panels five years ago, so we're really trend followers, not trend setters. 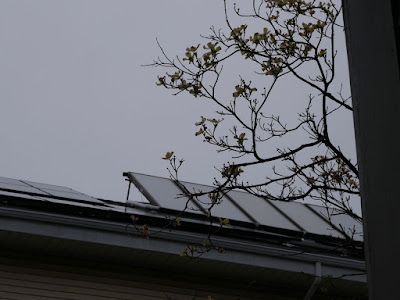 As Donald Trump arrives at 100 days in office, the BBC reports today that the U.S. economy slowed sharply in the first quarter of 2017. While these numbers undermine Trump's claim on the campaign trail that he alone can fix what ails us, the BBC also reports that Trump voters in Pennsylvania are not disturbed by it. In their eyes, Trump is following through on his campaign promises, which they like to see in a politician, and economic activity in their part of the country has increased not decreased, so they are happy.