On New Year's Eve, people gathered nervously in a living room in Wellesley to await the results of ClimateXChange's Tesla Raffle.  Who would be the lucky winner of a brand new $110,000 electric masterpiece?

It was a brilliant scheme by ClimateXChange: $250 bought you one ticket in the raffle for the brand new car. That sounds expensive, but organizers limited the total number of tickets sold to 2,000 so the odds were not some astronomical impossibility. One in two thousand. Well, I could almost win that?

ClimateXChange pulled this raffle together to raise awareness (and funds) for a simple goal, reducing global warming pollution and strengthening the economy through comprehensive market-based carbon pricing in Massachusetts.

By the way, Al Nierenberg of Massachusetts walked away with a new car. I guess it was just his night. As it turns out, two days later I walked into the Tesla showroom in the Prudential Building, lured by a beautiful red P90, and in talking with one of the salespeople, I heard that Al had just come in to start to spec out his new custom wheels.  Exciting times.

It's my hope to interview some of the organizers of the raffle, and also get some seat time in a Tesla, and I'll post all of that here. Meanwhile, here's the gorgeous P90 from last night, and a link to the video of the New Year's Eve raffle. 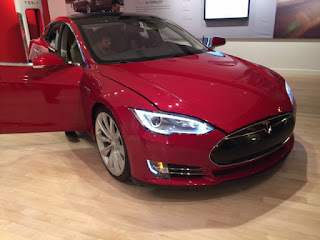 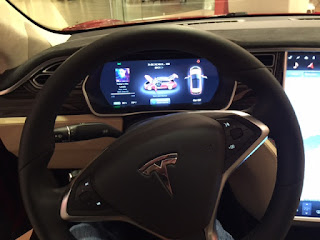 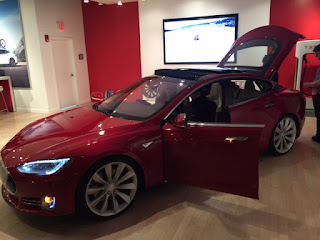 And you can watch the video of the ClimateXChange raffle drawing HERE.