Henry Ford sat in this rocking chair and revolutionized the world. 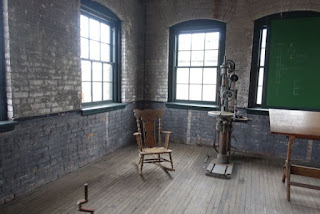 He was a man with no education to speak of, but he had a genius for machines and each day he would place himself in his rocker that he left in the corner of his "experimental room" in his Piquette Avenue plant in Detroit and think up improvements for his cars which he would then sketch out on a chalk board for his draughtsmen to draw up the following day.


Here's one such improvement, the very first internal combustion engine for the Ford Model T, the engine of the car that literally changed the world.


His workers at Piquette would get a delivery of car parts each morning, and in their work bay, they would hand-build each automobile. Parts that didn't fit were hammered or hewn into shape at the side bench until they did fit. There was no complaining to Mr. Ford about the parts you received. You either made them work, or you were fired.

At Piquette, Ford was able to produce a car every 12 hours, and his workers were producing over 100 cars a day, unheard of numbers in 1908.  It wasn't until three years later that the assembly line came into being at the new Highland Park plant, the first real behemoth of the industrial age.

Here are some of the gems Mr. Ford and his men produced ...

The Piquette Avenue plant was saved from the wrecking ball fifteen years ago and now operates as a museum focused on the early Ford Motor Company and the world-changing Model T. It is a five star must see for car enthusiasts or anyone interested in the industrial history of America. It's a remarkable place and a beautiful building. 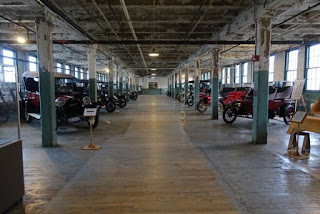