The Ford GTs, bookending a half a century

In 1967, Americans Dan Gurney and A.J. Foyt drove this Ford GT 40 Mk IV to victory at the 24 Hours of Le Mans, marking the first and only time an All American outfit - drivers, chassis, tires - has ever won that race.

It turns out, 1967 was the second of four consecutive victories for Ford, a streak that started the year earlier, the year of my birth. It would be another 50 years before they returned to the French 24 hour race with another GT car. But finally they have, and here it is ...


It's a beauty and I, who have made that same journey of decades, have come to Detroit to the Auto Show to see it.

It is only a V6, which is tiny by today's standards, but Ford is betting that the truer equation is power-to-weight wins out over just pure power, and so they're willing to sacrifice a little urge to gain (or should I say lose) on weight.

Both of these gems are on display at the 2016 North American International Auto Show in Detroit, and I had the chance to see them both last night as I walked around the COBO Center. 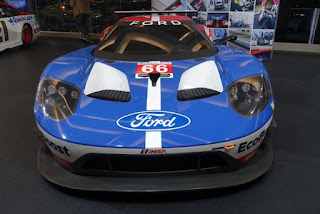 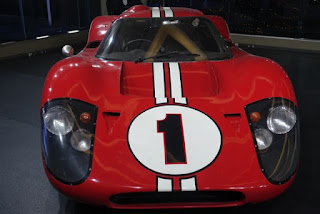 Look forward to more reports from the show over the next couple of days. There is lots here to see!
Newer Post Older Post Home