It’s a car that I’ve been interested in for quite some time, and one that I’m even considering purchasing, so I was very pleased to have the chance to take it around today for a short drive.

Here are some of my first impressions of the car ...

It’s a good size for a car — not too big, not too small.  It’s a hatchback with a reasonably sized area under the hatch. The back seat folds down allowing you to haul a good amount of gear back there and the space is uncluttered and usuable. 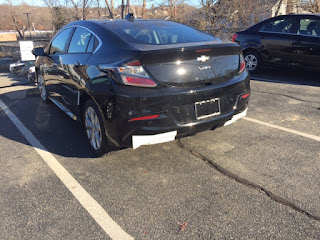 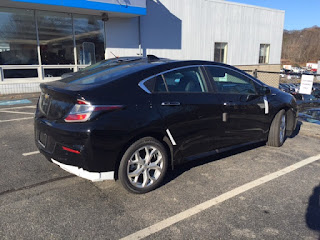 The styling is nothing to write home about, but not unattractive. I actually liked the styling of the first version of this car, which was slightly boxy and was often described as a science project. I thought that older version was distinctive. This newer shape has more curves, is more aggressive up at the front, and is by all accounts more conventional. 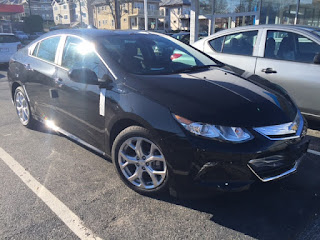 The interior is comfortable and in particular the driver’s seat is both well padded and well bolstered, making it a real improvement over my current, worn out driver’s seat in my ancient Subaru. 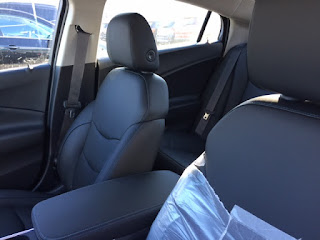 The cabin is well organized but feels small. The instrument displays and all the information about the car’s performance including all the dials are very well designed. 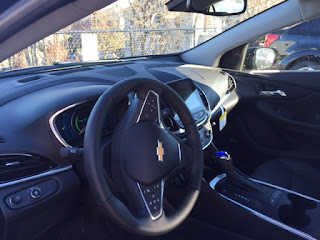 Visibility is good, but not spectacular. It is hard to gauge the front of the car because the hood slopes down too rapidly, leaving the driver with no clear sense of if he is going to scrape something. This is a poor design choice of the GM engineers. 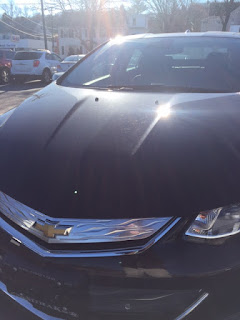 Contrary to what I’d thought I’d read, this electric car does make noise, in a good sense.  There is of course the road noise while driving (the car drives on Michelins, presumably with low rolling resistance). But additionally, the electric motors also make a whirring noise, which is helpful to gauge speed.

The famed torque from electric motors on acceleration is impressive though not overwhelming. The brake pedal feel is good. The suspension is good, though the car is not as buttoned down as its Chevy cousin, the Corvette. That’s not unexpected, but I guess I always want my cars to be a little sportier.  The batteries down low in the car have to be helpful in keeping this thing tight in the corners.

My overall impressions are that this is a solid, well-constructed car with some very important innovations tucked under the hood and in the drive train. Is it worth the $40,000 sticker price (there are approximately $10,000 is federal and state rebates on this car)? That depends on how you feel about what they've managed to accomplish in the total package.  I think probably yes, and it's good to know the cars are popular. The car I drove already had a deposit on it, and the dealer says they are offering  3 to 4 test rides a week.

Electrons for propulsion are the future, and coming from a major American manufacturer, this is undoubtedly an important car.

My next stop is Ford, to see what they have to offer in their plug-in options. Then, I’ll make the switch away from gas-powered to a battery powered driven world.