BREAKING NEWS ... The Donald unifies the country ... against himself!

As Donald Trump insists on setting another fuel tank on fire and pointing the nose of the Good Flying Ship Republican straight at mother earth, beckoning the fireball of electoral vaporization not only upon himself but also upon his (reputed) party, I pause this morning to consider the words above the main entrance to Langdell Hall at Harvard Law School. 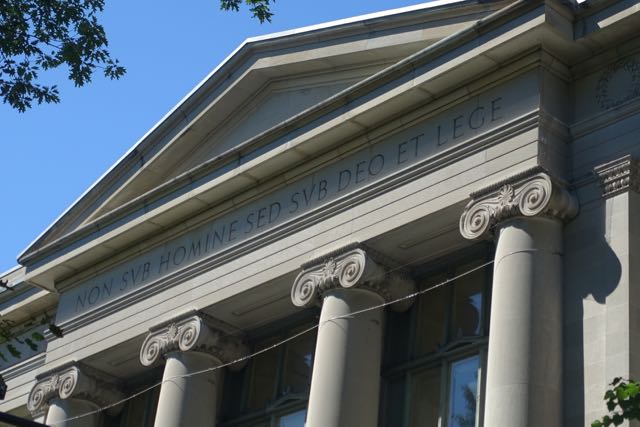 Since one of the law school's more distinguished graduates, a certain Barack Obama, has just called El Jefe unfit for the highest office in the land, we should reflect on why the architects bothered to etch those words in that lintel in the first place.

Not under man but under God and the law

Temperament and lack of knowledge disqualify Mr. Trump. His authoritarian and anti-constitutional tendencies disqualify him even more. "I alone can fix it." Those are not the words of a man who understands himself to be bound by the law.

It gives us the chance to once again reacquaint ourselves with the wisdom of our ancients. Here, quoting Wikipedia directly,


In 1776, the notion that no one is above the law was popular during the founding of the United States. For example, Thomas Paine wrote in his pamphlet Common Sense that "in America, the law is king. For as in absolute governments the King is law, so in free countries the law ought to be king; and there ought to be no other." In 1780, John Adams enshrined this principle in the Massachusetts Constitution by seeking to establish "a government of laws and not of men."