This past Sunday, I found myself in Essex, MA, eating fried fish at Woodman's and visiting the town's boat building museum.   Shipwrights have been building boats in the Essex boatyards continuously since 1668, when the town granted the easement for a public boat ramp into the Ipswich River.

There are a few local families that are famous for their boat building prowess, including the Story family and the Burnham family. In fact, I am told that the Burnhams are 11th generation boat builders in Essex, and that their ancestors in England were also boat builders. Apparently, it was not uncommon for the 17th century English settlers to import their skills and their trades, as well as their place names.  So the Burnhams remained boat builders.  But more interestingly, Rowley, Massachusetts was a place known for making sail cloth because Rowley, England had been a famous home for making sail cloth.

On my break from the museum, I wandered my way to one of the town's many antique stores.  Creeky and musty, with a porch-full of old red Radio Flyers, shops like this one dot the North Shore towns because vacationers enjoy to rummage through someone else's bric-a-brac and drop 100 dollars on a mirror.

I clearly must have fit that general description, because there I was, up a steep set of wooden stairs looking through old books, a favorite pastime of mine.  Amongst the piles,  I came across the 1946 report of the Harvard College Class of 1940.  Not something of particular interest, but class reports include biographical sketches of the members of the class and updates of what they have been up to since the days of alma mater.  It occurred to me that John Kennedy graduated Harvard in 1940.

I opened the book.

There inside was this sad truth: the Harvard class of 1940, like every other university class of 1940, was up to one thing upon graduation -- they were going off to war.  I remember asking a high school teacher of mine, an old white-haired fellow who taught Latin, about this time.  He looked ancient to my eyes in the early 1980s, but he had been a graduating college senior in 1940.  He smiled with slightly pained, slightly cynical smile and said "we all knew what we were doing" after college -- he, and all his friends, were going to visit Uncle Sam's nearest enlistment center and sign up for the United States armed forces.

So it was with John Kennedy, who joined the Navy. 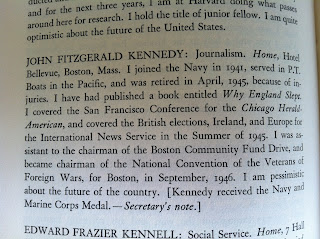 And so it was for so many of his classmates of whom 35 -- out of a 1,000 graduating seniors -- would be killed in the war.  Mind you, this is the 5th year reunion report (presumably delayed a year because of the war). The book began with the obituaries of these very young men.  Someone once said to me that the Army during wartime is a meat-grinder.  It takes all fresh hope-filled youth and turns it into a bloody red mess.

And in that odd quirk of history, one classmate of JFK's was this man.

If Kennedy was famous for his hawkish belligerence, in Cuba, in Vietnam, against the Soviets, then Pete Seeger became a symbol of peace, and he composed many of the anthems of the Peace Movement of the late 1960s that followed Kennedy's assassination.

Making sense of Kennedy and Seeger, and of this generation that went off to war and died so young is hard to do.  Upon their return, these young men all went about starting their lives.  Kennedy called himself a journalist and didn't mention his Navy commendations but did mention his books.  He was "pessimistic about the future of the country".  Seeger meanwhile  "hoboed around a while and then drifted into making a living as a singer of folk songs".  Over the next two decades, they together but separately changed America.  At one time, they were just young men facing war and seeing friends and classmates die.

No words about them outperform them in their own words.  For those, see below.

HERE is Pete Seeger singing the amazing song The Bells of Rhymney.

And HERE he is ringing out love between his brothers and his sisters all over this land. Both are from a concert in Australia in 1963.

Because I feel Pete Seeger should have the last word, THIS is Seeger singing Bob Dylan's A Hard Rain's Gonna Fall.  Worth watching.