I didn't have a line at my local polling place this morning. The voting was easy, organized and painless. Hard to imagine who I might have voted for, but I'll give you a hint. His name was Joe Biden.

The other evening, ambling on YouTube as I often do, I ran into the film Meet John Doe, a 1941 Frank Capra gem of Americana starring Gary Cooper and Barbara Stanwyck.

She's a wild, wise-talking journalist who upon getting fired from her newspaper pens one last column creating a character so distraught at the neglect of the little people, he's going to kill himself on Christmas Eve by jumping off of City Hall. His name is John Doe. It turns out, her story has struck a nerve. John Doe is popular, and newspapers are selling.  So her paper decides to keep her around and get a real John Doe to play the role. In walks Gary Cooper.

In the ensuing twists and turns, themes emerge -- the admiration of the little guy, the miseries of Depression-era men, the rapacious newspaper owner looking to turn a feel good story into political power, corruption in all its guises. And watching it, it didn't feel very far from today. Especially the love of the little guy, the downtrodden, forgotten soldier of decency in the American system. Get to know your neighbor, what's so hard about that?

As if to heighten the point, Capra culminates the film with a scene redolent with Christian crucifixion imagery. Determined to actually kill himself after he learns that he's been a pawn in a much larger scheme by newspaper owner Edward Arnold to take over the American political system, Cooper climbs City Hall tower on Christmas Eve. His persecutors and his supporters deduce that he may try to jump, so they climb the tower to meet him there. Stanwyck climbs the tower too, and in the snowy drifts of a cold night, she talks him down. John Doe does not have to die so that others might live. 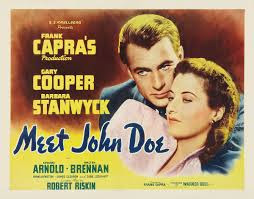