The idea of adding electric power to wheeled motion is a hot topic these days, as people tackle ways of promoting carbon-free or carbon-light transit.  In the realm of the bicycle, this phenomenon is taking many different shapes as people want to move around quicker and cleaner, and an aging cohort of bikers may be seeking new ways of moving around on two wheels.

Superpedestrian, a Cambridge startup, asked itself what this new bicycle might look like and they came up with something they call the Copenhagen Wheel, a bright red disk that sits in the rear hub and provides additional power and speed to the rider. 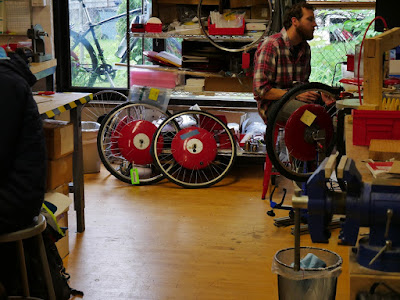 The Wheel marries technologically advanced robotics to the very simple mechanical motion of pedaling, and after years or research, the company thinks they have found their sweet spot. Assaf Biderman, founder and CEO, described it this way in an interview earlier this year, “We set ourselves an ambitious goal: integrating with a rider’s body in a way that makes you feel naturally stronger. It took over three years of engineering, but I can finally say we made that dream a reality.” 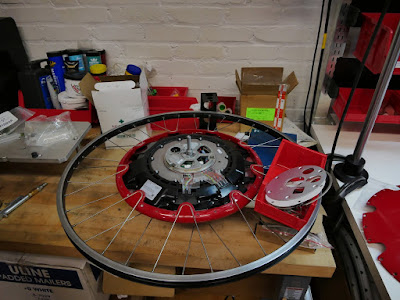 Still, it took years to transform a good idea to workable product. From its earliest days as a spinoff of the SENSEable City Lab at MIT, the first version of the Wheel, which appeared at the 2009 Copenhagen Climate Summit (from where it gets its name), cost $330,000 to make and weighed 42 pounds. In the intervening years, designers put it on a diet, bringing its weight down to 17 pounds and its price down to $1,499. They also shortened its production time to four weeks. A measure of the company's current success is a doubling of their workforce in the last twelve months.

It's interesting to hear Austin Federa, a manager at Superpedestrian, emphasize that it is not a bicycle company, it’s a robotics company. The hub provides additional power by sensing what the rider is doing and reacting before the rider can perceive it.

The company’s origins in the MIT lab play a big role in this. There, students and faculty alike reimagine the city and try to peer into the future about the ways it is changing. “That is just the way of thinking at the lab - to create a platform to study the city and how people are moving around it,” said Umberto Fugiglando, a graduate student looking at data retrieval in cars. Autonomous vehicles, he points out, are another example of a technology that will have huge implications not just not just for transit but also for parking and roadway allocation. That in turn will impact bicycle travel too.

Back at Superpedestrian, in a nondescript building on Hamilton Street, 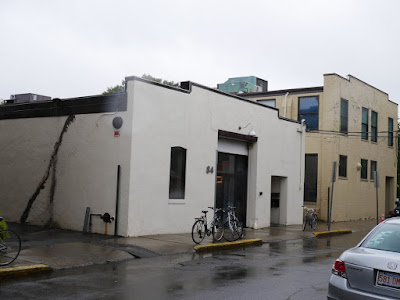 a room full of engineers and product specialists is working to grow this company and get this technology on the street. 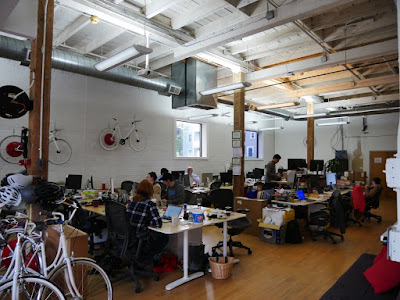 Bikes are lined up, ready to go for a ride, and these bikes will haul. The Wheel will assist a rider up to 20 mph, (any faster, and the vehicle would have to get a license plate), and on a full charge, the battery can propel the bike 30 miles before it needs recharging. In addition, the Wheel is a data resource, talking to an app in your phone, and has different settings ranging from "Turbo," which offers strong acceleration, to "Exercise," which provides light resistance to help build cardio. While parts are sourced from different countries, the Wheels are assembled 30 miles away in Westford, Mass. 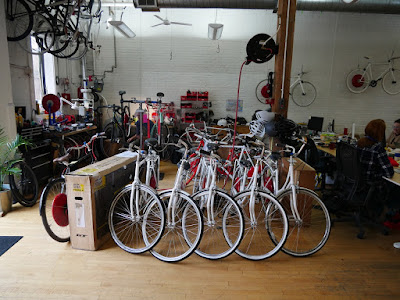 The potential applications of this new technology are many, though the company is in the early phases of building its brand. Its target consumer is an urban rider, but there are many others: bike-sharing companies, for one, like Hubway in Boston or Citibike in New York could add it as a component to their bikes, or police departments might find a use of bike patrol officers, giving them added range and speed as they move around a city.

My initial ride was a thrill, and I hope to get back on a Copenhagen Wheel-ed bike soon, to see what it feels like over some distance.