As many of you know, I've become a bit of a car nut in my recent years. It's a handy way to spend time (or do I mean to waste time?) and like anything, it becomes more interesting the more you know about it.

Which brings me to where I am right now, the 2016 12 Hours of Sebring, one of the most venerable and venerated endurance tests in motorsport. It takes place every year in March in Sebring, Florida, and the top teams take out their new tech kits and run them around the track to see who will fare the best. Yesterday, I had the pleasure of watching the race live, rain and all. Here are some of my notes and photos of the experience ...

I now have gone to a few car events, and every time I go, I always think I should write a blog called "What going to Grateful Dead shows taught me about automobiles" because they share many similarities ... grungy people camping in fields for days, some of them needing tickets to the event, drinking lots of beer (or in the case of the Dead, smoking lots of dope).

I showed up too late for the start of this year's race because my drive down from my hotel took longer than I thought. I arrived at the main gate to this unexpected question by a gate attendant, "Any water, fireworks or guns in the car?" When I answered "no", he waved me through. That led me to a full parking lot, which worried me a little, but I found the last spot in the way back corner. Having dealt with my wheels, I packed up my gear, which consisted of my camera and some recharging cords, and headed down to the track. Notice that nowhere in here did I mention either rain gear or something to keep me warm. Both would become more relevant as the morning wore on.

At the track, I saw this ... cars moving at tremendous speed in conditions that can only be considered slippery, if not dangerous.


And that was before the rains really came. After only a few laps of seeing these cars rolling at these high speed, the conditions got even more treacherous.

The two cars I cared about the most were the American makes, the new Ford GT with its stunning aerodynamics and red, white and blue livery, and Corvette Racing, a team that's been dominant over the past year with their deep throated V8 rumble. Talking to a guy at Corvette, he said that Ford was the one to watch. Once they had worked out their kinks in the program, their car was going to be a world beater.

It wasn't until the lightning and the thunder that they decided to red flag the race, requiring all drivers to return to the pits until the weather subsided and it was safe to race again.  Here's what we looked like ...


Once racing resumed, the drama unfolded in all kinds of ways. In the classification that I care about - GT Pro, also known as GTLM - Porsche was dominant for a number of laps in the middle of the race, with their two 911s holding the road exceptionally well in the difficult conditions, but at about Hour 9 of the race, it appeared that one of these two Porsches crashed into one of the Corvettes, knocking them both out of the race and promoting a Ford GT up to the front of the pack.

For all the excitement the rain brought earlier in the day, it wasn't until nightfall that the true nature of the contest become apparent. The speed of these cars is appalling. The wail of their engines is terrifying. The idea that there is a driver in that cockpit, making decisions, taking chances, is hard to imagine. Still, there is an undeniable magic once evening comes. All of a sudden, we enter the kingdom of night, become spirits in the half-seen world, a merry band of fools and pranksters. The yellow hue of the headlamps poke little dots of light through the linen of blue dark, visible down the full distance of the straightaway, then they grow in size until they fly by with a roar and change into little red taillights moving away.

At that moment, the length of the race, both in terms of time and distance and endurance, becomes clear. The cars scream. The party revs up and I had to go. Given the long drive that awaited me, I couldn't stay for the checkered flag. Still, here's what I saw ... 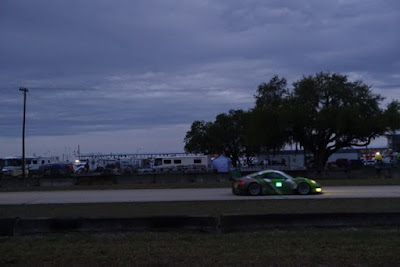 There is of course some wonderful strange at these events. Just to give a sense of what I meant with my Grateful Dead comments, here's some of the fringe ... 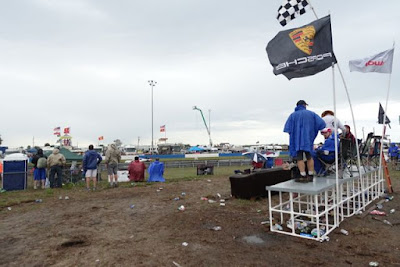 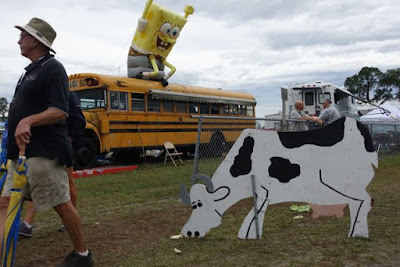 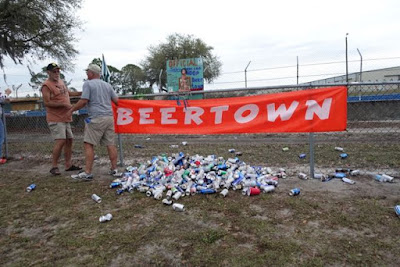