Mapping Detroit in red and blue, in black and white

A mapmaker is a storyteller.

Eric Fischer makes maps and here's a story he tells about Detroit. Or maybe it's a story that Detroit tells about itself. Dots represent people, blue African-American, red Caucasian. 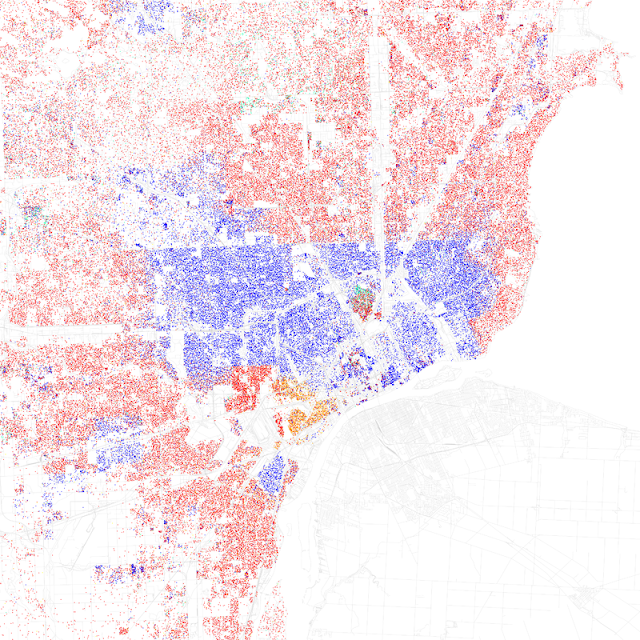 In part, we know the story already. It's a story about how we segregate along the lines of race and class.

But the map is striking for so many other reasons. Graphical beauty distracts from exceptionally efficient narration about a highly complex social phenomenon. The map starkly reveals how human behaviors have played out in physical space. Before we even get to what the implications might be, we get the clarity of where we are.

Now, we can begin to unpack the many things that will fill in the picture, the policies and practices that led us here, and all the associated issues like the employment, the physical infrastructure that played a part in creating this pattern.

The horizontal line where the blue dots end and the red dots begin is 8 Mile, the northern boundary of the city of Detroit and north of downtown, it represents a near complete barrier between white and black. That a road can so clearly demarcate a racial boundary is surprising only by its absoluteness.

Detroit in red and blue, or should I say in black and white?

[Each dot represents 25 people. Blue represents African-American; Red represents Caucasian. The data is from the 2010 US Census. For more information about Eric Fischer, a Google search is a good idea.]
Newer Post Older Post Home