The stories white people tell themselves.

Every culture has its myths. Myths are the stories a group tells itself about itself to reinforce its sense as a group. Often these stories speak of the exploits of a “hero class”, individuals who stand out from the rest, exemplars of the creed.

As the recent unrest in Ferguson, Missouri and today’s funeral for Michael Brown bring the American struggle of race once again to the fore, it occurred to me that looking at the artifacts of white culture might be interesting and informative and helpful too.

Last week, I noticed two magazines on a table that screamed at me “what white people read” with a vengeance. Wired and Vanity Fair are the repositories of a portion of our collective narrative — glossy and vain, informed yet inconsequential, highly self-congratulatory. 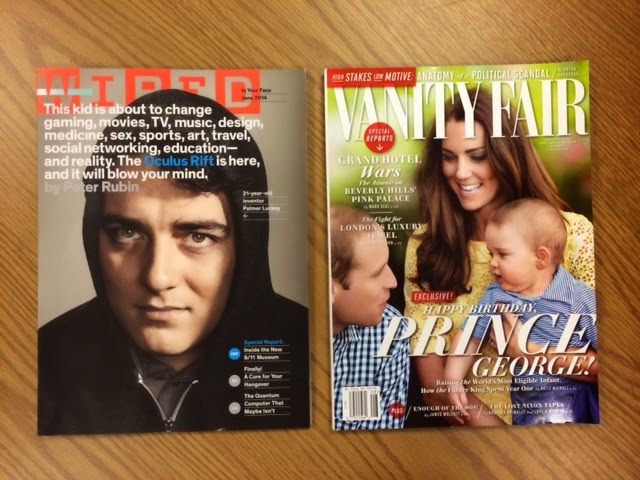 On Wired, a young man with a square-ish jaw and broad cheekbones looks back at us, hooded sweatshirt covering the top of his head. He’s a combination of Luke Skywalker and Obi Wan Kenobe. It turns out, he is 21-year-old Californian Palmer Luckey, creator of something menacingly named the Oculus Rift, which apparently will change the way our world works.  He is the hacker-child-genius extraordinaire, with the looming potential of also becoming a billionaire. American archetype #1. In our age of internet, this has become a version of the American Hero.

Vanity Fair, true to a time-tested formula for selling magazines, has put the duke and duchess of Cambridge on their cover. Though they are not American, the Cambridges are nevertheless American archetype #2, young, British and royal. Kate with her natural English beauty — Karl Marx once remarked that of all the women in Europe, English women were the most beautiful — sits highest on the page, top of the triangle of bodies, and her two “boys”, her husband William and their son George, form the base. They are prince and princess and child, traveling the world, not really real, but not make-believe either.

Of course, there are other expressions of whiteness in our nation. A website established to raise money for the police officer who shot Michael Brown had so many racist comments posted on it, they shut it down.

The snapshot of America today is odd. A country changing so rapidly relives its perennial misery even still.