The Tragedy of Iraq (cont.)

As if that weren't enough, the border region between Syria and Iraq is fast becoming an ungoverned zone under the control of ISIS, the violent Sunni extremist group currently engaged in overthrowing the Maliki government in Baghdad, according to veteran journalist Robin Wright. Wright made the claim on Monday's Diane Rehm Show, but apparently has seen this coming for quite some time. In a September, 2013 New York Times piece entitled "Imagining a Remapped Middle East", she put forward the idea that lines in the Middle East could get redrawn, posing this fundamental question:


A century after the British adventurer-cum-diplomat Sir Mark Sykes and the French envoy François Georges-Picot carved up the region, nationalism is rooted in varying degrees in countries initially defined by imperial tastes and trade rather than logic. The question now is whether nationalism is stronger than older sources of identity during conflict or tough transitions.

To answer it, she notes that even strongly nationalistic countries like Syria now have multiple nationalisms within their borders, the ever-present phenomenon of "cleansing" always adds to the challenge and "guns exacerbate differences". Events, it seems, have caught up with her foresight.  Today's Post furthers her thesis with a map entitled “How ISIS is carving out a new country.” 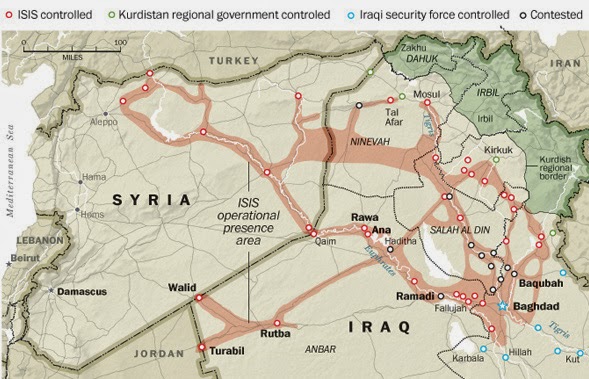 The Post goes on to describe the situation this way:


ISIS militants are fighting the governments on both sides of the Iraq-Syria border, and an apparent decision by Syrian President Bashar al-Assad to intervene to help Maliki further tangles the already complex knot of actors in the overlapping crises.

In Syria, the United States opposes both Assad and ISIS, which it condemns as a terrorist, al-Qaeda-inspired organization.

Iran supports both Assad and Maliki and is sending aid to both, although Iraq’s ambassador to Tehran on Tuesday denied reports that the leader of Iran’s Revolutionary Guard Corps was in Baghdad helping the government there, Iran’s Fars News Agency reported.

As Iraq disintegrates, the inability of the U.S. to act effectively in this scenario only makes its culpability in helping to create it all the worse. Whatever course the U.S. does choose, dealing with ISIS, buffered as it is by two failing states, will come at a huge cost. Deep war weariness severely constrains American options. It seems that our interests will lead us to a strange bed-fellowship with Iran and therefore with Assad of Syria, and both will present ethical conundrums as well as geopolitical ones.  Watching the fragile Middle East unravel this way is like watching a car crash in high definition slow motion.
Newer Post Older Post Home