Finally, there is a detailed study of the phenomenon that has fascinated me for years, since I was a Cambridge city councillor. On Monday, the Brookings Institution will release its report The Rise of Innovation Districts: A New Geography of Innovation in America.  The report makes sense of the emerging phenomenon in America and around the globe that’s bringing smart entrepreneurial young people together into urban settings to create the next wave of the economy, and in the process disrupt old patterns and practices of both methods and outcomes, while at the same time transform the urban spaces used for working, living and playing. 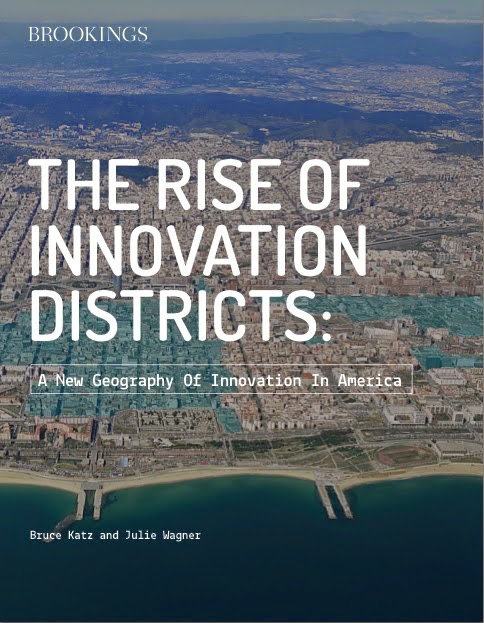 According to the report’s authors, Bruce Katz, director of the Metropolitan Policy Program at Brookings and Julie Wagner, a non-resident fellow there:


Innovation districts constitute the ultimate mash up of entrepreneurs and educational institutions, start-ups and schools, mixed-use development and medical innovations, bike-sharing and bankable investments—all connected by transit, powered by clean energy, wired for digital technology, and fueled by caffeine.

Katz and Wagner call Cambridge’s Kendall Square “today’s iconic innovation district”, citing the presence of MIT as a core driver in what they have termed the “anchor plus model”, which they describe this way:


The “anchor plus” model, primarily found in the downtowns and mid-towns of central cities, is where large scale mixed-use development is centered around major anchor institutions and a rich base of related firms, entrepreneurs and spin-off companies involved in the commercialization of innovation. “Anchor plus” is best exemplified by Kendall Square in Cambridge (and the explosion of growth around MIT and other nearby institutions like Mass. General Hospital) and the Cortex district in St. Louis (flanked by Washington University, Saint Louis University, and Barnes Jewish Hospital).

The report is thorough and insightful and represents a fundamentally important addition to the literature on innovation and American cities.  Brookings is to be commended for their work and their talented team.  Like most times of change, this one is hard to get a handle on.  The pace is brisk, the implications large, and the distribution uneven.  But Brookings is showing us the signposts, and giving us a sense of what they mean.

More information about Monday's release can be found here: