It’s a Friday, which means it’s a Grab Bag Day.

Flags At Half Mast
I look out on the Longfellow School and I see that the flags are at half-mast. For a moment, I pause, then, of course, it’s the two fire fighters who died in the Boston blaze.  I say flags because the American flag is always paired with a black POW-MIA flag flying beneath it. 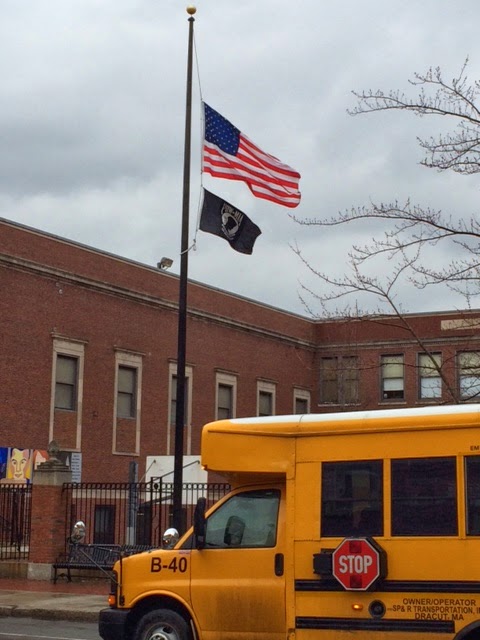 Those POW flags I think were a political compromise to get the Vietnam veterans to desist from their contention that American prisoners were still being held in Vietnamese prisons long after official hostilities had ended.

They aren't a bad metaphor for the impact of Vietnam on America — black, accusatory, mournful, remembering, slightly paranoid, and always flown in conjunction with the stars and stripes.  It’s about as a good a graphic symbol as any of what that war meant to this nation, certainly in retrospect.

But I still want to know, when does this cultural reference point become part of the history of a bygone era?  At what point do we officially say that all our Vietnam-era combat troops are either dead or home?  American helicopters flew off the roof of the Saigon embassy 40 years ago next April.  How much longer should those black flags continue to fly from our flagpoles?

Midnight Train to Georgia
Later next month, I will travel to Atlanta for the American Planning Association conference.  The trip is in part to refresh my thinking on planning, but it will also be an interesting chance to see a city I don’t know.

Most interesting of all, however, will be how I get there.  I plan to take Amtrak all the way from Boston to Georgia.  That’s 19 hours on the rumbling rails, with only one train switch, in New York City’s Penn Station.  It’s a roll back into the past.

I’ve only taken one other long-distance train trip in America, a 2.5 day journey from Oakland, California to New York City.  I made that trip in 1986 with Colley Wheeler.

While it made for a good memory, I also remember the profoundly uncomfortable seats with cushions so worn down that you could feel a metal bar running across your back just below your shoulder blades.  I remember walking into the observation car with its large picture windows curving up to the ceiling to show the grand American landscape rolling by — the Sierras, the Rockies — but the bigger impression was of old grey-haired ladies filling the car with cigarette smoke while gripping their gin and tonics tightly at 11 o’clock in the morning, a bit of a damper on an otherwise nice experience.  By Chicago, we were all ready to jump off a moving train, having been cooped up for so long, but it was a treat to order a pizza from a train phone (cell phones were still unknown then) and have the delivery guy meet us track-side.   We felt as though we were almost home, having crossed the majority of the American landmass by that point.

This trip will be experiment — to see about Amtrak’s long-distance operations and what if any future there is for distance train travel in the United States.  It also will be part of my quirky commitment to explore life and land by a road less traveled.  When time and money are available, one has two of the great riches one could ever hope to have (health is another).  It would be a shame not to use them well.