Tiananmen in Berlin, a memoir

Twenty-four years ago today, I was sitting in a tiny bedroom in a second floor apartment on Boddinstrasse in Berlin, Germany.  Though it was a sunny day, the room was shrouded in tangerine  light from the orange curtain draped across the window.

I was renting the room from a guy named Beil, which means ax in German.  He was never there, always at his girlfriend's apartment somewhere else in the city.

Berlin still had the Wall then, die Mauer as it was called.  It was a wild city filled with anarchists, homosexuals, draft resisters, artists, feminists and the occasional fascist. If you were a German willing to live in Berlin, you didn't have to do your time in the army.  It was a very liberal city with a very illiberal past.  For a guy who'd just been living in Berkeley, California, this was an eye-opener.

There was a beautiful museum in the city.  I don't remember its name, but it was housed in a square building of balanced 19th century proportions.  Somehow, it hadn't been destroyed during the war.  Next to it were the old underground cells where the Nazis used to torture Communists in the early days of Hitler's reign.  The white porcelain tiles on the walls were still seeable down in the trench where the rooms still sat - part ruin, part trash, part historical artifact.  Presumably the tiles made washing the blood off much easier.

Erich Honecker was one of the most famous occupants of those cells.  He was a young Communist in the 1930s, but forty years later he was the head of the East German government, just across the Spree, in a different country, with the same language.  In what seemed to me a very German way, this place had been "forgotten about" until it was "discovered" during a construction project.  When people realized what it was, they preserved it as a lesson for future Germans.

Elsewhere, the old Anhalter Bahnhof, one of Berlin's glorious train stations, still lay roofless, cordoned off and collapsed.  It was 44 years after allied bombs ceased falling on the city.  That was just normal old Berlin. Who knew it was about to turn into a wild time.

On June 4, 1989 Michael Chang was climbing the ladder of the French Open.  The California teenager would go on to beat Stefan Edberg on the hot red courts of Roland Garros, one of the great finals ever of that tournament.  That happened later.

June 4 wasn't a Saturday, it was Sunday. Regardless, my German wasn't that good.  Watching the news generally wasn't very enriching, but it wasn't always totally futile either.  Information came to me in dribs and drabs.  This time it didn't really matter because something visual was going on -- some guy in a white shirt was standing in front of a row of tanks. Some guy in Tiananmen Square was holding back a row of tanks.  The driver of the lead tank tried to coax his metal behemoth around the lonely guy.  It was not an act befitting a massive, armored killing machine.  It was more like a guilty dog trying to skirt past his master.  Why he didn't just run him over we will never know. 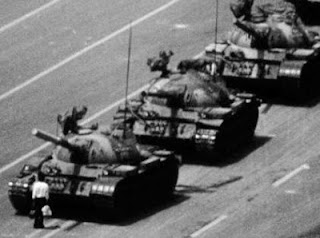 In my tangerine room I had a tiny black and white TV on which I watched all these events unfold.  I got West Berlin news, and I got East Berlin news.  Often it was very different news, but on June 4 the pictures were the same.  The guy.  The tanks.  Still, the descriptions were very different, one might even say worlds apart.  Either this was a defiant stand against oppression or counter-revolutionary forces undermining the march of progress.  Talk about an ideological schism.

I was later to learn the phrase "Where you stand depends on where you sit".  It's an old bit of Washington wisdom that says your point of view is highly reliant on what responsibilities you have.  The expanded statement would read something like "Where you stand [on an issue] depends where [on which Congressional committees] you sit."  Well, in the great battle to define history, two German newscasters, one East, one West, sat no more than a few miles from each other and through battling copy editors and compliant teleprompters ushered in the era that would be called the "End of History", an era that also generated plenty of American talk of a "Peace Dividend".