The 2012 Election and the new (Silent) Majority

The election is over now.  Barack Obama is our president.

Meanwhile the Republicans are eating their young.  The unrepentant among them, and there are many, vie to show the ostrich how to do its work by digging their heads as deep as the sand will let them.  The intelligent among them, and they still exist, try to measure the length of their self-imposed tunnel before they even bother looking for the light.  And the final third of this triumvirate is the real rope around the Republican Party's neck -- the fringe element that controls the party by controlling the primary process for choosing candidates.  This element is frightening, and large, and accounts for the claims that climate change is a hoax and there is such a thing as legitimate rape, both uttered by GOP politicians. As a young woman said today on a radio call-in show: "No thinking person will vote for that, no matter what their governmental philosophy might be."  And that is exactly the point.  No thinking person will vote for that, ever.

Moderate GOP leaders seem blind to the dark shadow this dispossessed angry voter casts over their chances to appeal to 21st century multicultural, inclusive, cooperative America.  Christie Todd Whitman, a former New Jersey GOP governor herself, pointed out that older white fundamentalist Christian males are simply not enough to build an electable party, never mind a governing coalition.  She certainly qualifies as one of the intelligent ones.

Meanwhile for the rest of us, Election Day was good.  In Massachusetts, long lines of Cambridge voters met poll workers when doors opened at 7AM.  The lines didn't lessen, the voters did not let up, for hours and hours.  There was a massive effort to turn out the vote, to see Elizabeth Warren become the first female Senator from the state.

Her bid to defeat Scott Brown had a deep meaning to many here.  More than just the sting of having a Republican in the seat that had been Ted Kennedy's, there is a sense among liberals that a new majority is coming into being.  It is progressive and Left-leaning, and it votes Democratic.  It is the antithesis to the Nixon Silent Majority of the early 1970s, when disaffected Southern conservative Democrats joined forces with Northern urban working-class Catholics to abandon the Democratic party in droves, over Civil Rights, over Women's Rights, over the Vietnam War.  Ronald Reagan understood this ten years later and expanded it.  With his folksy control of the airwaves, he cloaked the country in the American flag and his brand of conservatism (which seems strikingly tolerant and cooperative compared to today's Republican rhetoric).  Liberals were on the run.  Democrat George McGovern won only Massachusetts in the 1972 presidential election.  Democrat Walter Mondale won only Minnesota in 1984.

But that has changed in large part because the country has changed.  While the South hasn't budged, remaining strongly Republican (at least they are true to that conservative value), the northern urban centers have experienced a true renaissance.  The cloak of their old industrial past has been shed.  They have become the new home of innovation, hipness, finance, information, and strongly Democratic-leaning politics. Even Detroit, a city on the perpetual downturn, is finding small places of upturn in this new century.  For activists, this election had to be an assertion of a new blue majority.  And it was.

At first glance of the electoral map, you might not come to that conclusion with so much red to see. 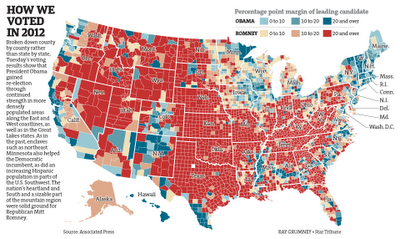 In this county-by-county look at the dispersion of Democratic (blue) and Republican (red) votes in 2012, vast swaths of the middle part of the country are Republican, and solidly so.  But of course the population concentrations exist along the coasts.  From Maine down to Washington DC, Democratic.  Bordering the Great Lakes, also Democratic.  The West Coast almost in its full entirety, Democratic.  The exception is in the South, where the coastal counties along Gulf Coast remain Republican.

As it turns out, the blue districts correlate with the economic activity most strongly associated with 21st century America, the America that is still the innovation hub for the world: the Bostons, New Yorks, San Franciscos, Seattles.  These areas share a lot in common -- multicultural, tolerant, high levels of education, high incomes, long histories of immigrant arrivals living in close proximity and high density to the existing populations.

This map speaks of today's America, and it points to the challenge that the Republican Party faces.  The blue areas will not only continue to be blue for the foreseeable future, but they will continue to grow, in population, in economic strength, in wealth and in power.  They will both contribute and be influenced by the globalized work environment that is our new reality and soon to be our new norm.  They prize innovation, inclusion, and cooperation in their ethic.  And they see the Democratic Party not only as reflecting that, but as understanding it and implementing those values in its own work. In this world, in multicultural America, old divisions such as skin color and language of origin lessen in importance, to be replaced by new divisions -- education level, access to capital and information -- presenting a whole new set of thorny challenges.

Can the Republicans understand this enough to have something relevant to say about it?  I think not in the near future.  Their endless focus on tax cuts seems to betray a lack of deeper comprehension of the complexity of the challenges, and the momentum within the party to travel down bad alleyways that are ultimately dead-ends is too strong to alter nimbly and responsively.  But it is safe to assume that even for Republicans eventually it will not be heresy or punishable by political death to utter the words: science is real and women are equals.  If not, it's the way of the Dodo bird for them.
Newer Post Older Post Home