Velib: the Paris word for Have Bike, Will Travel

I could not be in Paris without spending at least a passing moment on Velib', the bike share system in this city.   My first confession is that my knowledge is really quite limited.  Outside of what I can see on the street, and what a couple of people have told me about it, I know next to nothing.  In a French way, accessing the system has a layer of bureaucracy to it that seemed too much of a hassle when I arrived.  Online sign up, and then a trip down to City Hall to pick up a card that gives you access to the bikes.  It's not a lot to ask, but it was too much for me on my arrival (and given the sub-zero temperatures, the incentive to ride a bike at that particular moment was very limited).

Nevertheless, here are a couple of observations:

Bike stations are ubiquitous - that means everywhere, and they really are.  Racks for parking the Velib' bikes are throughout the city and each one has the capacity to hold many many bikes.  This has to be one of the keys of success to the system, and it looks to me like Paris has figured that one out. 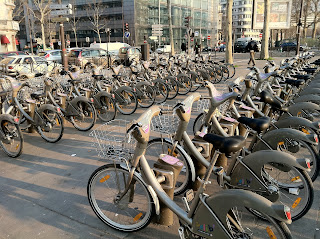 Feel lucky if you can find a bike.  Although bike stations are everywhere, this doesn't mean that bikes are everywhere.   Not surprisingly, and not unexpectedly, bikes suffer for maldistribution throughout the system.  That means that some locations are popular places to pick up bikes, and other locations are popular places to park bikes.  It is not untypical to come across a bike station with no bikes in it at all.  The system deals with this challenge by having trucks to redistribute bikes around the city.  They have not figured out that part of the system yet.

Velibs are popular.  Many many people ride these bikes in the city.  Indeed, unlike some American cities, such as Cambridge and Boston, where a biking culture has sprung up on its own, Paris' biking culture seems highly reliant on the Velib' as the catalyst for people to ride bikes, at least during these cold winter months.  That's a nice thing - public investment has met a public interest and created a new transportation option for a city of 2 million people.

The road doesn't just belong to cars.  Paris, a congested city with many cars, has accepted the fact that the roadway is as an important part of the successful introduction to bikes in the city as the bikes themselves.  In ways that continue to surprise me, a major world city has decided that the roadway doesn't just belong to cars, and separated lanes, and painted lanes exist throughout. 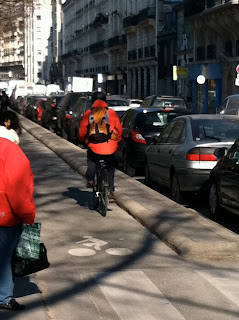 Bikes are not the only two wheeled vehicles.  While Velibs should be recognized for the pleasure value they provide to citizens of Paris, they are also a transportation option.  But they aren't the only option.  Motor scooters play a much bigger role in Paris transport than they do in the states.  This is both good and bad.  Good in the sense that a scooter is a much more energy efficient way to get around town, and bad in the sense it gives bikers active competition for that road space, which is just another danger to bikers.

The final tally.  Trying to get a sense of the Velib' system in a Siberian January in Paris is not the right time, but it clearly is a system that makes a difference, and really works.  Is it making a difference in the overall transportation picture?  I do not know, but as one person said to me vehemently and with passion -- "You have to do it!"