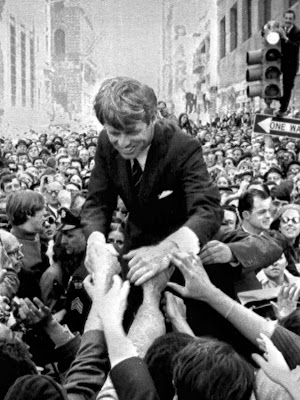 Here in my study, in its listlessness
of Vacancy, like the old townhouse we shut for summer,
airtight and sheeted from the sun and smog,
far from the hornet yatter of his gang--
is loneliness, a thin smoke thread of vital
air. But what will anyone teach you now?
Doom was woven in your nerves, your shirt,
woven in the great clan; they too were loyal,
and you too were loyal to them, to death.
For them like a prince, you daily left your tower
to walk through dirt in your best cloth. Untouched,
alone in my Plutarchan bubble, I miss
you, you out of Plutarch, made by hand--
forever approaching your maturity.

I turn from Yeats to sleep, and dream of Robert Kennedy,
Assassinated ten years ago tomorrow.
Ten years ago he was alive --
Asleep and dreaming at this hour, dreaming
His wish-fulfilling dreams.
He reaches from the grave.

Shirtsleeves rolled up, a boy's brown hair, ice eyes
Softened by the suffering of others, and doomed;
Younger brother of a murdered president,
Senator and candidate for president;
Shy, compassionate and fierce
Like a figure out of Yeats;
The only politician I have loved says You're dreaming and says
The gun is mightier than the word. 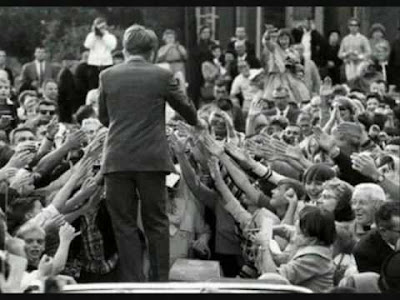 NPR StoryCorps: The busboy who cradled a dying RFK recalls those final moments


Robert Kennedy ... in his own words 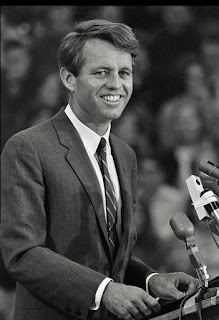 It may be that the effort [in Vietnam] was doomed from the start, that it was never really possible to bring all the people of South Vietnam under the rule of the successive governments we supported -- governments, one after another, riddled with corruption, inefficiency, and greed; governments which did not and could not successfully capture and energize the national feeling of their people. If that is the case, and it well may be, then I am willing to bear my share of the responsibility, before my fellow-citizens. But past error is no excuse of its perpetuation. Tragedy is a tool for the living to gain wisdom, not a guide by which to live. Now as ever, we do ourselves best justice when we measure ourselves again ancient tests, as in the Antigone of Sophocles: "All men make mistakes, but a good man yields when he knows his course is wrong, and repairs the evil. The only sin is pride."


Social progress and social justice, in my judgment, are not something apart from freedom; they are the fulfillment of freedom.


Every man must have his own vision of things to come. But many Americans, I believe, share broad and deep hopes for the world -- the hope of a world without war -- of a world where peoples now suffering in poverty and oppression can win a better life for themselves and their children -- of a world where the imagination and energy of mankind are dedicated, not to destruction, but to building a generous and spacious future.


On the Democratic Party


I run for the Presidency because I want the Democratic Party and the United States of America to stand for hope instead of despair, for reconciliation of men instead of the growing risk of world war ...


On the Assassination of Dr. King


Your eminences, your excellencies, Mr. President. On behalf of Mrs. Kennedy, her children, the parents and sisters of Robert Kennedy, I want to express what we feel to those who mourn with us today in this cathedral and around the world.

We loved him as a brother and as a father and as a son. From his parents and from his older brothers and sisters, Joe and Kathleen and Jack, he received an inspiration which he passed on to all of us.

He gave us strength in time of trouble, wisdom in time of uncertainty and sharing in time of happiness. He will always be by our side.

Love is not an easy feeling to put into words. Nor is loyalty or trust or joy. But he was all of these. He loved life completely and he lived it intensely ...

My brother need not be idealized or enlarged in death beyond what he was in life. He should be remembered simply as a good and decent man who saw wrong and tried to right it, saw suffering and tried to heal it, saw war and tried to stop it.

Those of us who loved him and who take him to his rest today pray that what he was to us, and what he wished for others, will someday come to pass for all the world.

As he said many times, in many parts of this nation, to those he touched and who sought to touch him: "Some men see things as they are and say, why. I dream things that never were and say, why not."