It's Friday, so we're going to do this as a Grab Bag, and it's going to be All Trump, All The Time.

I. Trump's budget is the American carnage he warned us about.

The 45th president just released his new budget, and the numbers are staggering. According to a Fox News analysis, the document calls for increases in Defense, Homeland Security and Veterans Affairs, and cuts in everything else, slashing the State Department by 28 percent and the EPA by 31 percent. 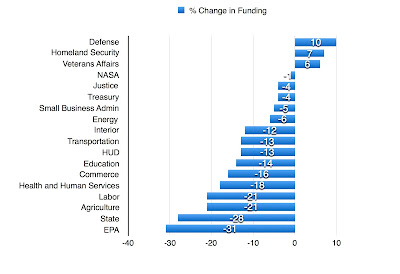 This all comes in the context of Donald Trump's past pronouncements starting with an inaugural address that gave the most dire assessment of this country. Unlike FDR's soaring exhortation to fear nothing but fear itself, or Kennedy's call to ask not, or Reagan's invocation of pilgrim John Winthrop's belief that we would become a city on a hill, Trump could only offer these dark words, "This American carnage stops right here and stops right now."

It turns out Trump wasn't expressing what caused him fear or kept him awake at night. Trump was actually indicating what he planned to do once he got his hands on the reins of power in the Oval Office. This budget, Trump's first, isn't the end of American carnage. It is the beginning of it.

Mitt Romney's prescience in March of 2016 proves to be hauntingly accurate:


[Trump's] domestic policies would lead to recession; his foreign policies would make America and the world less safe. He has neither the temperament nor the judgment to be president, and his personal qualities would mean that America would cease to be a shining city on a hill.


And in other lighter news, Trump's Twitter war with Snoop Dogg has heated up, with rapper Bow Wow joining the fray. Once again, Fox News brings us the story.

The rapper said in a since-deleted tweet Wednesday, "Ayo @realDonaldTrump shut your punk a-- up talking s--t about my uncle @SnoopDogg before we pimp your wife and make her work for us."

Bow Wow, whose real name is Shad Gregory Moss, was responding to President Donald Trump's tweet to Snoop Dogg after Snoop Dogg released a music video where he shoots a clown dressed as Trump.

Trump tweeted Wednesday, "Can you imagine what the outcry would be if @SnoopDogg, failing career and all, had aimed and fired the gun at President Obama? Jail time!"

A rep for Bow Wow did not return Fox News' request for comment. Snoop Dogg has yet to respond to Trump's tweet.


Sebastian Gorka, President Trump’s top counter-terrorism adviser, is a formal member of a Hungarian far-right group that is listed by the U.S. State Department as having been “under the direction of the Nazi Government of Germany” during World War II, leaders of the organization have told the Forward.

The elite order, known as the Vitézi Rend, was established as a loyalist group by Admiral Miklos Horthy, who ruled Hungary as a staunch nationalist from 1920 to October 1944. A self-confessed anti-Semite, Horthy imposed restrictive Jewish laws prior to World War II and collaborated with Hitler during the conflict. His cooperation with the Nazi regime included the deportation of hundreds of thousands of Jews into Nazi hands.

I guess it's just another Friday at 1600 Pennsylvania Avenue.