Femi Kuti played the Paradise in Boston last night, and he hit all the right notes. Not a man to hide his passions, he wore a jacket straight out of Joseph and the Amazing Technicolor Dreamcoat. 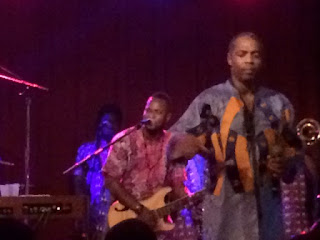 He also came with a full compliment next to him — two drummers, four horn men, a bassist and a rhythm guitarist, three dancers, and of course himself, Femi Kuti — Femi on sax, Femi on clarinet, Femi on keyboards, Femi on vocals; you name it, he was up there doing it. 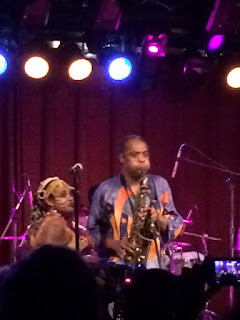 With that many people on the stage in a small club like the Paradise, the performers fill the room. But that’s why you go to the Paradise, music and people in small spaces with loud sounds, performers and audience communicate. It’s direct and it’s only a handshake from the pit to the players and Kuti obliged with some audience handshakes of his own. 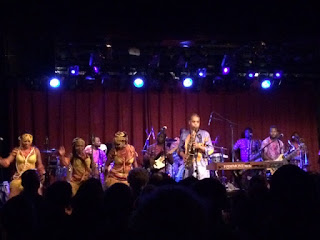 In afrobeat, no song ever really begins or ends. It just merges in or fades out. Or in Kuti's case, it clangs in or bangs out. Any song could have continued if it wanted to. Nothing has to finish, it just does so because there’s another song in the queue. The music is part of the continuous stream of rhythms and beats in our bodies and in our brains. It just takes a brass section to make it audible.

Kuti built the crowd from the start. The opening numbers reached back into the archives. They were softer, more hopeful, with hints of a lilting beauty reminiscent of reggae. That allowed him to hit the audience with newer starker stuff later on. Still, it took a while to get energy in the room.  The start was tuneful but flat.

A man of great energy and talent himself, the 52-year-old Femi Kuti wears the heavy mantle of being the son of a famous father, Fela Kuti, a musician with his own fascinating story and international importance. Fela's story is many times told, including in a 2009 Broadway production of great energy and power, and like father like son, politics is never far from anything Femi Kuti is doing. The country of his youth and the history of colonial Africa are all part of his message. Kuti’s version is that Nigeria was never cowed by the British imperialist in the way its neighbor Ghana suffered. Pestilence, inhospitality and the end of the slave trade insulated Nigerians in a fundamentally different way than what their neighbors experienced.

Perhaps also like father like son, Femi Kuti seems the lady’s man too. As a humorous end note both to the concert and to this very short review, he closed out his encore with a speech about the need for men to control themselves during intercourse (notice the slightly Victorian phrasing here). To paraphrase him, men should, "reverse back" when they feel themselves losing control. He urges, make it last longer than five minutes. Don’t shame yourself and all men by a lack of control.  “Reverse back” and add a couple of minutes. Pretty soon, it’ll be eight minutes, and then ten, and before long, it’ll be thirty minutes!

At this point, two very white, very middle-aged very middle class women decided they had to depart the Paradise building. Obviously, they had become suddenly very very tired. Or maybe their ankles were starting to hurt. Still, their departure seemed, well, not very international. 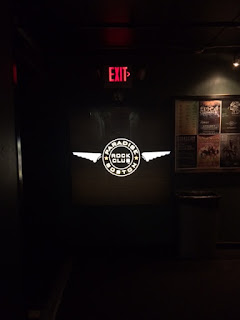 Femi Kuti's short American tour goes to Brooklyn next and onto D.C. before shows in the U.K. In our global world, there are few better global ambassadors than he. It’s worth going to hear him and his afrobeat. 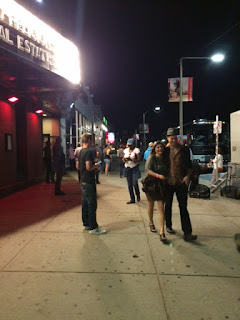