Boston 2024. The Olympics come to Cambridge.

I haven’t closed my mind to Boston 2024, the bid to draw the Olympic Games to the Hub, and that should come as no surprise. I am not naively hostile to projects simply because they imply new construction. Being both urban and a planner, I don’t think it makes sense to be afraid of the future, a fear which has always struck me as reactionary, conservative, and most of all, unthinking. The future contains as many opportunities as it does pitfalls, and for every major failure there will be an offsetting success.

Furthermore, becoming an Olympic city is not an insignificant accomplishment. To say Los Angeles 1932 or Rome 1960 or Moscow 1980 is to say something real.

Nevertheless, the Boston bid deserves our skeptic’s gaze. Urban salvation never comes through a sporting event nor does it come through a series of construction projects spurred on by one. Not that Boston is looking for salvation, but these projects often take on meanings that they don’t deserve.

So when a Boston 2024 organizing team walked into Cambridge Rindge and Latin High School auditorium last week, the audience was ready. I arrived late, as usual. I didn’t catch the names of the presenters but I certainly recognized a familiar sound —  hostility from the crowd, high dudgeon, factual inaccuracies and sanctimony. Nevertheless, it presented a useful counterpoint to the rah rah, of which there was very little.


I knew one of the presenters, David Manfredi, from my time as a Cambridge city councillor, when I saw him frequently from his repeated trips before that body. Back then, the idea that his firm would design the entire Kendall Square district made me uneasy. Arborists don’t plant only one species of tree for a reason — if one of them gets a disease, they all get the disease — and cities should follow this wise advice when choosing architects for their large-scale urban design work. Nevertheless, Manfredi was always sane, rational and competent, traits that stood him in stark contrast to some of the others in those debates. He also could handle projects of the size and scale that Kendall demands.

No doubt, the Boston 2024 committee felt the same way. In some ways, the ability to do large scale projects becomes a self-fulfilling prophecy — the more big projects you do, the more qualified you are to do them.  These days, Elkus-Manfredi sits at the top of that pile in the Boston market.

In these Olympics discussions, there is a natural tension developing. On the one hand, it is important to use the infrastructure that this region already has. On the other, we need a more sustainable, inclusive regionalism, a challenge that the Olympics do nothing to address.

Let’s look at infrastructure. The organizers have called their plan the Walkable Games and they intend to exploit existing resources in the Boston area. This list would include the T and the universities.
They cite the following statistics ... 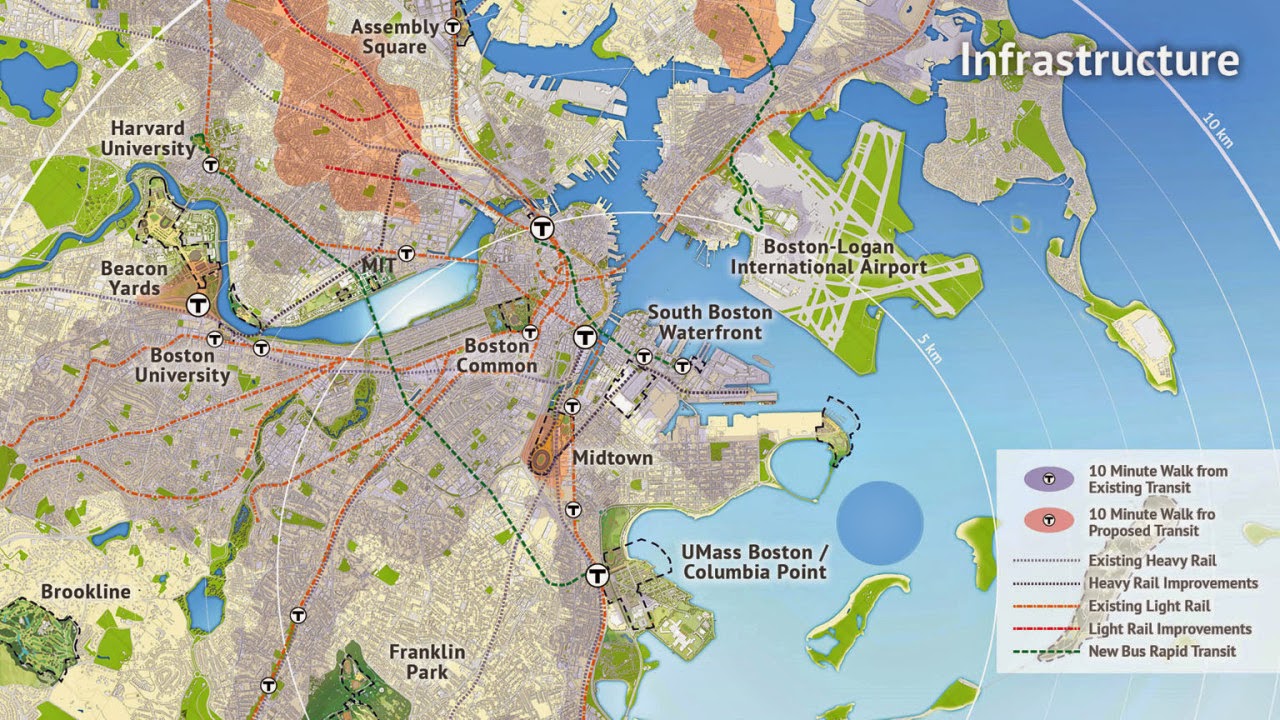 The majority of events will be held in Boston, with others scheduled for Newton and Lowell. Cambridge will host archery (at MIT) and swimming events off of Magazine Beach.

They also say there is a commitment to legacy, what is left over when the Games are gone. Agenda 2020, approved by the International Olympic Committee last December, calls for greater sensitivity to prevent another Beijing, where The Birdcage, the famous stadium built exclusively for the 2008 Games, now sits empty and completely unused. In the words of IOC president Thomas Bach, "With a new philosophy in the bidding procedure we are encouraging potential candidate cities to present to us a holistic concept of respect for the environment, feasibility and of development, to leave a lasting legacy."

An example of legacy might be the Boston Olympic Village, to be built in proximity to the UMass Boston campus. It’s housing that will get a second life as part of the university system. However, it will be paid for by taxpayers.

Budgets and cost overruns remain a major concern. Of course, one man’s cost overrun is another man’s budget expansion, but leaving that aside for the time being, the organizers have committed not just to transparency and accountability, but also to insure against the extreme “what if?” scenario when catastrophic failure occurs. With insurance.

The overall budget numbers are based on the London 2012 numbers, with an operating budget of $4.7 billion and a capital expenditures budget of $3.4 billion. The money will come from broadcast rights, ticketing, sponsorships and some public-private partnerships. Some expenditures will presumably fall off-budget and be part of the public bill for the Games, like the housing at UMass. Nevertheless, the Boston 2024 team expresses confidence all targets can be reached, citing data that the Tokyo 2020 Games are ahead of schedule in money raising. Olympics in the U.S., they say, have a good track record of turning a profit. Los Angeles 1984 ended up with $232.5 million in surplus, Atlanta in 1996, $10 million, and Salt Lake City in 2002 a positive $56 million.

As for the indirect impacts, The Boston Foundation recently found that a Boston 2024 effort would have a significant positive financial effect. According to news reports, “the study predicts a Boston Olympics would generate roughly $4 billion in new construction from 2018 to 2023, $5 billion in economic activity from the operations of the Games in 2024, and $514 million in additional tourism-related activity the year of the event. Researchers figure $2.1 billion of the construction spending and $2.9 billion in operational spending would be new money coming into the state from outside the region and directly benefiting Massachusetts companies."

The Games also create the opportunity to accelerate transportation investments, as happened in Salt Lake City in 2002 with a roadway expansion and a light-rail system that was put in five years ahead of schedule. With the failures of the T over this past winter, these words are welcome sounds.

Those are the potentials of a Boston 2024. Still, there is a huge missing element in all of this and it is regionalism.

These Olympics must address an issue that isn’t so much about people as it is about place. We live in a region with a fractured geopolity and we have a very difficult time cooperating on plans that extend beyond a city’s edge. We are a region that struggles to act like a region. The Olympics as they are currently construed do nothing to offset that. We need an Olympics that will spread the benefits of this endeavor beyond the usual locations: central Boston, Cambridge, the immediate inner core.  Indeed, these Olympics need to reach the people and places that aren’t within a five minute walk of a T station. This is so challenging because it’s contrary to sound planning principles.

Machinations will continue over the coming months, and don’t listen solely to the naysayers or swoon easily for the advocates. The Olympics represents a huge opportunity for not just for our city but for our region, for a specific reason David Manfredi alluded to in his testimony, in which he mentioned a 2011 white paper out of NYU’s Wagner School entitled “How New York City Won the Olympics.” Of course, New York didn’t win the 2012 Olympics, but the Wagner paper asks if it’s possible to “win” the Games even if you lose the bid? "Do cities benefit from hosting large-scale sports events such as the Olympics or the World Cup? Some cities have derived real, long-term benefits from hosting the Olympics: Tokyo in 1964 and Barcelona in 1992 are usually cited as best examples. Others – such as Montreal in 1976 and Athens in 2004 – have been left with little more than underutilized facilities and inflated debts."

With this vision in mind, NYC2012 – the organization formed to develop the city’s bid – formulated a plan that focused on seven areas of the city that had been the subject of multiple studies but were still relatively underdeveloped – the Far West Side of Manhattan, Brooklyn’s East River Waterfront, Long Island City in Queens, the Flushing section of Queens, Harlem, the South Bronx, and Downtown Brooklyn.

Although New York City ultimately lost its Olympic bid, comprehensive plans were approved for the targeted areas. In each, a major rezoning was completed, which included planned affordable housing, mass transit enhancements, new parks and amenities, and other new infrastructure. In addition, four of the facilities that were to be part of the Olympic Plan have either been completed or are under construction.


This makes sense. As I said in my public comment last week, we “fail" if all we do is invest in those communites that already are thriving — Boston, Cambridge, neighboring communities. We “win” though the process of good planning and creative visioning, addressing the needs of our communities in tangible, lasting ways that tie this disparate region together.
Newer Post Older Post Home