I went to Walden Pond today to see what I could see.

I went to Walden Pond today.  In part, I wanted to prove that climate change had changed our climate.  Henry David Thoreau records in Walden the dates that the pond froze over for the winter, over a series of years:

He also records the date that the pond typically thawed:


I never knew [Walden Pond] to open in the course of a winter, not excepting that of '52-53, which gave the ponds so severe a trial.  It commonly opens about the first of April, a week or ten days later than Flint's Pond and Fair Haven ... (from "Spring")

I fully expected that the pond would not be frozen.  I was wrong.


Since I was already there, I decided to walk around the edge of it, to see the world that Thoreau knew so intimately.  When I got to the far side I saw the place he describes so well, essentially unchanged:


The Fitchburg Railroad touches the pond about a hundred rods from where I dwell.  I usually go to the village along its causeway, and am, as it were, related to society by this link.  The men on the freight trains, who go over the whole length of the road, bow to me as to an old acquaintance, they pass me so often ... (from "Sounds")

From there, I found the place where he lived:


When I first took up my abode in the woods, that is, began to spend my nights as well as days there, by accident, was Independence Day, or fourth of July, 1845, my house was not finished for winter, but was merely defense against the rain .... (from "Where I Lived, And What I Lived For")


I was seated by the shore of a small pond, about a mile and a half south of the village of Concord and somewhat higher than it, in the midst of an extensive wood between that town and Lincoln, and about two miles south of that our only field known to fame, Concord Battle Ground; but I was so low in the woods that the opposite shore, half a mile off, like the rest, covered with wood. (from "Where I Lived, And What I Lived For")

One inconvenience I sometimes experienced in so small a house, the difficulty of getting to a sufficient distance from my guest when we began to utter the big thoughts in big words. (from "Visitors")


He shared his place with many of his friends from the woods:


The wasps came by thousands to my lodge in October, as to winter quarters, and settled on my windows within and on the walls overhead, .... but I did not trouble myself to get rid of them ... (from "House-Warming")

Squirrels and wild mice disputed for my store of nuts.  There were scores of pitch pines around my house, from one to four inches in diameter .... The hares (lepus Americanus) were very familiar.  One had her form under my house all winter, separated from me only by the flooring, and she startled me each morning by her hasty departure when I began to stir, -- thump, thump, thump, striking her head against the floor timbers in her hurry. (from "Winter Animals")


Finally, I wended my way back to where I started, but not without taking a moment to reflect that many a winter night long ago, 168 years to be exact, Henry David Thoreau looked out on this pond, paused, beheld what he saw, and like me, strove to see. 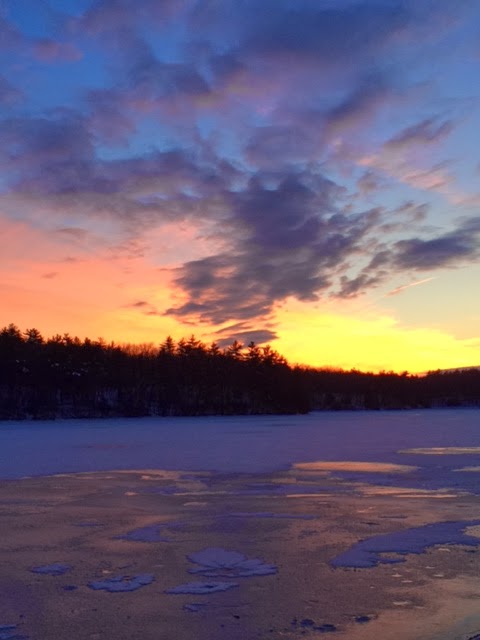 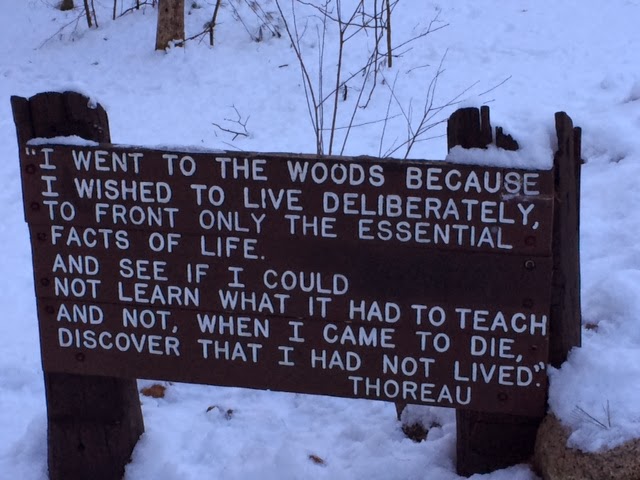