Woody Allen on my mind.

I've been watching Woody Allen films recently.  As with most things, it's not entirely clear why.  To the best of my knowledge, it all started when I saw a three minute clip from Hannah and Her Sisters on YouTube.  It was one of those accidental YouTube sightings, when you're actually looking for something else, and then out of the corner of your eye, you see a "Suggested Post".

I loved Hannah and Her Sisters.  It came from that halcyon time (whatever the hell that actually means) in Allen's movie making -- the decade and a half centered around the 1980s when the ink that formed in drops at the nib of his prolific pen was all pearls ... and movies upon movies, each of deceptive depth, bounced like too many little pink playground balls before our eyes.  In New York, these balls were called Spaldeens, though you would have spelled them correctly "Spaldings".  Wisdom cloaked in neurotic New Yorkese.

One of the great moments in Hannah is a meal around a large table in a New York apartment.  I can think of no other scene that conveys that New York better, by inhabiting so intimately the room in which the complexity of Manhattan life takes place.

Then there's a scene when Woody walks around the Upper West Side, including a portion on Broadway.  I cannot quite place the actual location though I know I know it well.  It's like trying to remember a dream.  The knowledge is there, deeply ingrained, but not responding.  Of course, Hannah was filmed almost 30 years ago.

A street setting caught on film becomes a historical record of place.  But why can't I remember?

Our minds distill the past.  Then we construct narratives that link these memories together.  We are trying to explain ourselves to ourselves.  This is literally the story of our lives as told to us by us.  It helps us take meaning out of the mincemeat of experience.  But we only achieve this by blurring the rest.  Even when confronted with the actual photographic record of it, we see only our memory.

I mean, who really remembers when a gallon of gasoline cost $1.03, as it does at one gas station in Crimes and Misdemeanors (1989)?  Who remembers when you could see a whole row of pay telephones like in Manhattan (1979)?  Who else finds it odd to see interior shots of New York offices where the electric typewriter, not the computer, is the professional's writing tool, as in Manhattan Murder Mystery (1993)?

And btw, exactly where was Klein's Pharmacy on Broadway? 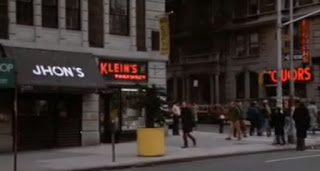